05 MIN LI-
RE
Accueil
Tous nos articles
Why Amsterdam’s DGTL Festival 2017 was once again ahead of its time
Écrit par Trax Magazine
Photo de couverture : ©Tom Doms
For the fifth year in a row, Easter Weekend marked the start of the festival season in Amsterdam, as over 20.000 eager troops gathered at the old NDSM shipping docks for a celebration of electronic music. Summer clothes were unboxed, sunglasses polished, and although the weather was unforgiving at times, DGTL’s strong lineup and production provided an abundance of ingredients for a fulfilling opening of the season. But there’s more to the festival than music and leisure: with aspects such as the Revolution program, the festival aims to not just inform its visitors about ecological awareness, but rather activate them to participate in an eco-friendly festival. ‘The time for awareness is over’, as the website reads – we visited DGTL 2017 to find out just what that entails.

This year’s musical offer saw a wide array of electronic music’s most popular acts, coupled with some interesting underground sounds. Throughout the weekend visitors were treated to performances from the likes of Maceo Plex, Dixon, Motor City Drum Ensemble, Jamie Jones, Âme and DJ Koze, to name a few. With six different stages, all of them indoor or covered to withstand April’s unpredictable weather, and a big open area connecting them, DGTL is large-scale in production but maintains a cozy feel.

On the ferry to the festival area, which is located a 20-min boat ride from Amsterdam’s central station, it was immediately apparent Saturday’s crowd would be different. Young hip locals, long-haired blonde girls, and long men with their bikes at hand dominated the ferry ride to the festival terrain, which can be marveled at as you cross the IJ river. Originally a shipping yard, Amsterdam’s quick growth pushed the docking facilities out towards the newly built industrial terrains in the deep west. The NDSM terrain was abandoned for some time, but the last few decades have seen a change in ownership and nowadays an abundance of leisure events and hotspots have taken ground in the area. It has a Berlinesque vibe, with large slabs of concrete, metal hangars and an impressive old shipping crane by the seaside (where private Crane Sessions took place all weekend). The mood was quickly set on the ferry, with beers and laughs passed around abundantly. 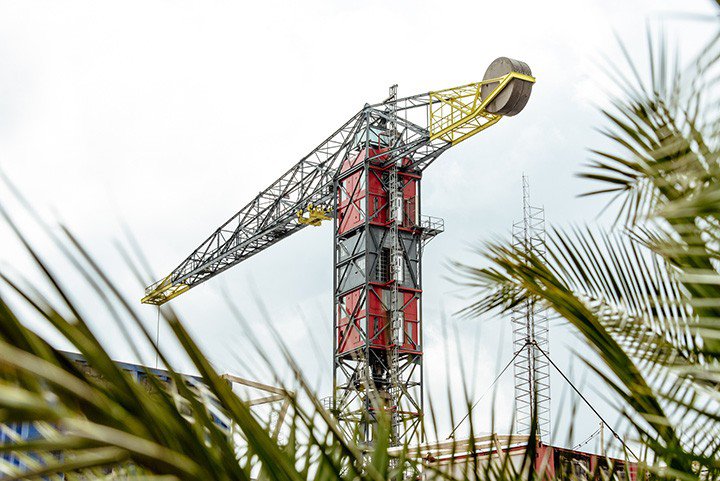 Once through the gates, the festival greeted us in full force. With the sun shining and people smiling, it’s not hard to understand why people are so eager to be out again. The terrain is conveniently spread out, with the six stages surrounding a central open area where all token stands and the food court are located. One small downside is the large metal bridge you need to cross to get to the Generator and Modular stages, which gives the terrain an unnecessary division and increases walking times. We started at the seaside terrain, where the Frequency stage embraced our cold bodies with warm palm trees, greenhouse temperatures and an excellent live set by Moscoman. The Israeli producer brought a drummer and bassist with him, which worked excellently with his psychedelic grooves and drum patterns.

Meanwhile, local hero Dollkraut brought us back to the 80’s in Resident Advisor’s tiny Gain stage. With its 300-max capacity, this cozy little tent brought intimate performances by the likes of Maceo Plex and Jennifer Cardini, as well as some more underground artists. Further down the road, the Amp stage (curated by Mosaic on Saturday and Dixon on Sunday) portrayed the complete opposite, with its huge tent and impressive visuals over the complete length of the back of the tent. We saw Henrik Schwarz grooving up an eager crowd with his pumping African-style beats infused with harmonic vocals. On our way to see Jamie Jones, the Filter stage caught our attention. Shaped like a metal hangar, it emanates a rave-like vibe, which was matched in lineup by some excellent performances. To name a few, over the weekend we saw Sau Poler B2B Awanto 3, Jeremy Underground, Leon Vynehall B2B Ryan Elliot, Midland and Joy Orbison B2B George Fitzgerald testing the metal’s resonant powers. 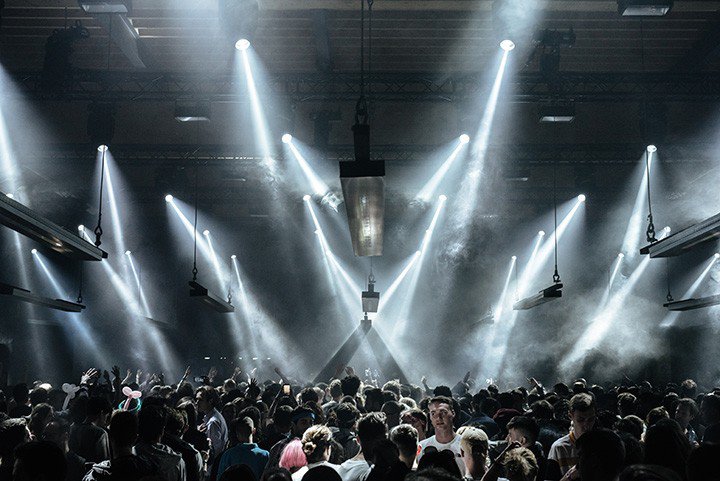 But we made haste crossing the bridge, as the coming hours would bring sets by Jamie Jones, Max Cooper, Tom Trago and Stephan Bodzin at the Modular & Generator stages. The Modular stage, with big light-strobed cubes suspended over the crowd, served a fine stage for Jamie Jones to prove his nu-house capo status, wrecking the place with relentless house bangers. A hard feat to follow, Tom Trago proved a bit rusty on his live skills, but he got in the flow after about half an hour or so, ending his set with some tight grooves.

Ending a festival day is always a hard choice, as most big names compete for your attention. Our choice was the Amp stage, where after a sick live acid set by Paranoid London (that MC though, why… ?), man of the hour and stage curator for that day Maceo Plex showed us off in style. His dark driving brand of sound coupled with an impressive visual display (props to the VJ) pushed and rocked the packed tent, forcing the crowd to give it their last ounces of energy. Successfully, for about half the stage seemed set on visiting the afterparty, which we decided to skip as to be fit for the next day.

After Saturday’s huge crowd (it had sold out well in advance), Sunday had a more relaxed feel, with more space to walk, dance and enjoy the terrain. Accordingly, we chose to submerse ourselves in DGTL’s alternative program, with which they aim to educate and activate their audience. Most of the Revolution program is centered at the Downtown area, where one can activate their wristband for the ECO Coin program. A new feature at DGTL 2017, ECO Coins can be earned by performing in various ecological programs. Once earned, these ECO Coins are convertible for special rewards such as digital downloads or durable products. For instance, we ate some not-so-tasty maggots which can be used as a food substitute, drank a liquid food container called Lik, and exhaled some fresh CO2 into an algae system which turns it into proteins.

A bit further we visited a nano-supermarket, where several products were displayed that could shape our future. With products as cola with fat-blocking coating or paint that changes color by controlling an app, nano-technology is an interesting development in consumer goods. The display gives a positive view on tomorrow’s consumerism, albeit a suggestive one. Another cool feature were the stands where you could buy beer brewed from potatoes that would otherwise be thrown away, as well as shakes from fruit destined for the trash cans.

The festival’s ecological offer isn’t just a gimmick restricted to these stands. All DGTL merchandise is made from durable products. The complete food offer is vegetarian. All stages are solar-powered where possible. In case of aggregates, they run on biodiesel. The terrain is spotlessly clean, courtesy of 400 volunteers involved in the cleanliness program and an overload of trashcans with motivational texts. All of DGTL’s power consumption is monitored and saved on where possible. Rather than just a marketing tool, the organization uses eco-technology in almost every way thinkable, be it visible or in the background. Criticism has emerged over the festival’s claim to being the ‘greenest festival out there’, but with so many applications being used in some many different ways, one cannot argue that DGTL is one of the front-running festivals as far as being green is concerned. Though their aim to become the first no-waste festival in a matter of years may be a steep mountain to claim, they have definitely started the ascent, and they’re bringing the right gear with them. 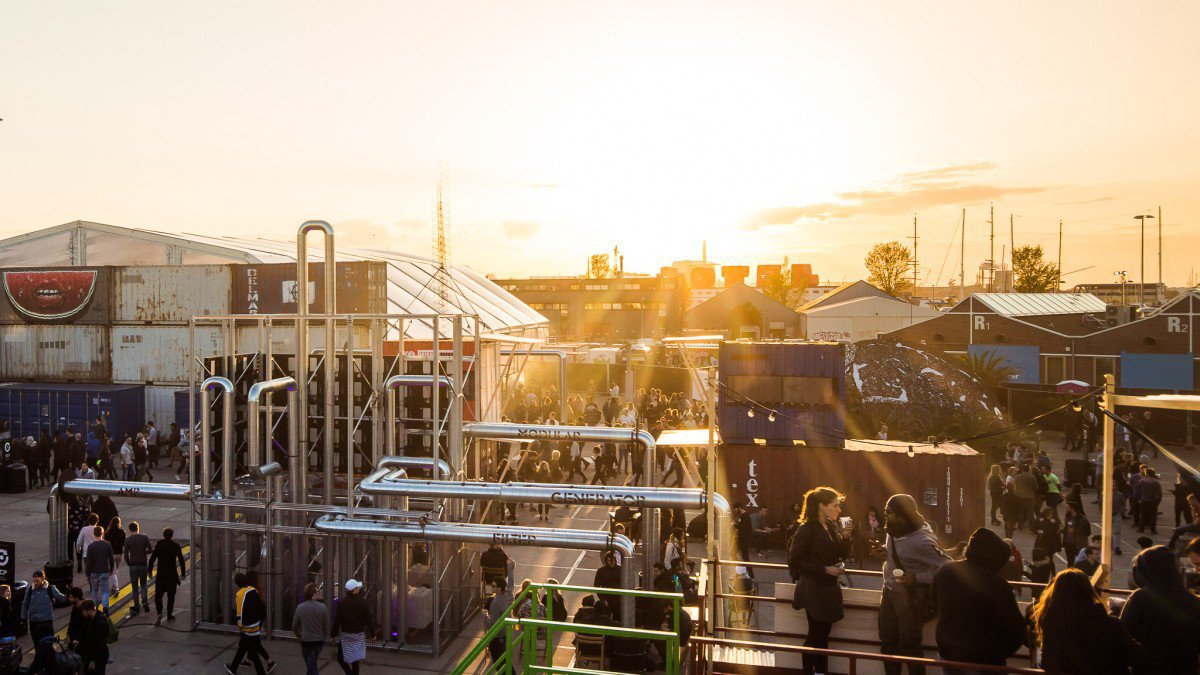 Of course, music was equally abundant in Sunday’s program, where we saw Motor City Drum Ensemble tearing down the Modular stage with a funk-laden set, Sterac & Konstantin entwined in a techno journey at the Generator, Andhim wrecking the Kornuit secret stage for a euphoric intimate crowd, and Matthew Dear running the bass through the Frequency stage to name a few. As Dixon closed the Amp stage and DGTL came to a stop, we couldn’t conclude otherwise: DGTL brings electronic music’s elite, couples it with interesting underground leftwing visionaries, shapes it all with the finest of visual and auditory production, all the while taking responsibility for 20.000 people’s trace on the planet, and packs it together as the ultimate opener of the festival season. No other festival does it quite like DGTL does, and we hope their opening status influences other organizations to do the same.