The music brutally stops over the gigantic dancefloor. The thousands of dancers freeze while a Maoist looking dictator appears on the screen of the monumental Bang Hai Palace she faces. She starts a self glorifying speech but is quickly interrupted by a storm of grey pixels, a masked character takes her place, and announces that the revolution is coming. Dozens of lasers lash through the dark, the structures start to spit flames, two trapeze artists descend in front of two spirals on both sides of the scene and the DJ takes the reins back with an apocalyptic drum’n’bass tracks. You’re at BoomTown, the English festival that puts techno parties into a new era. 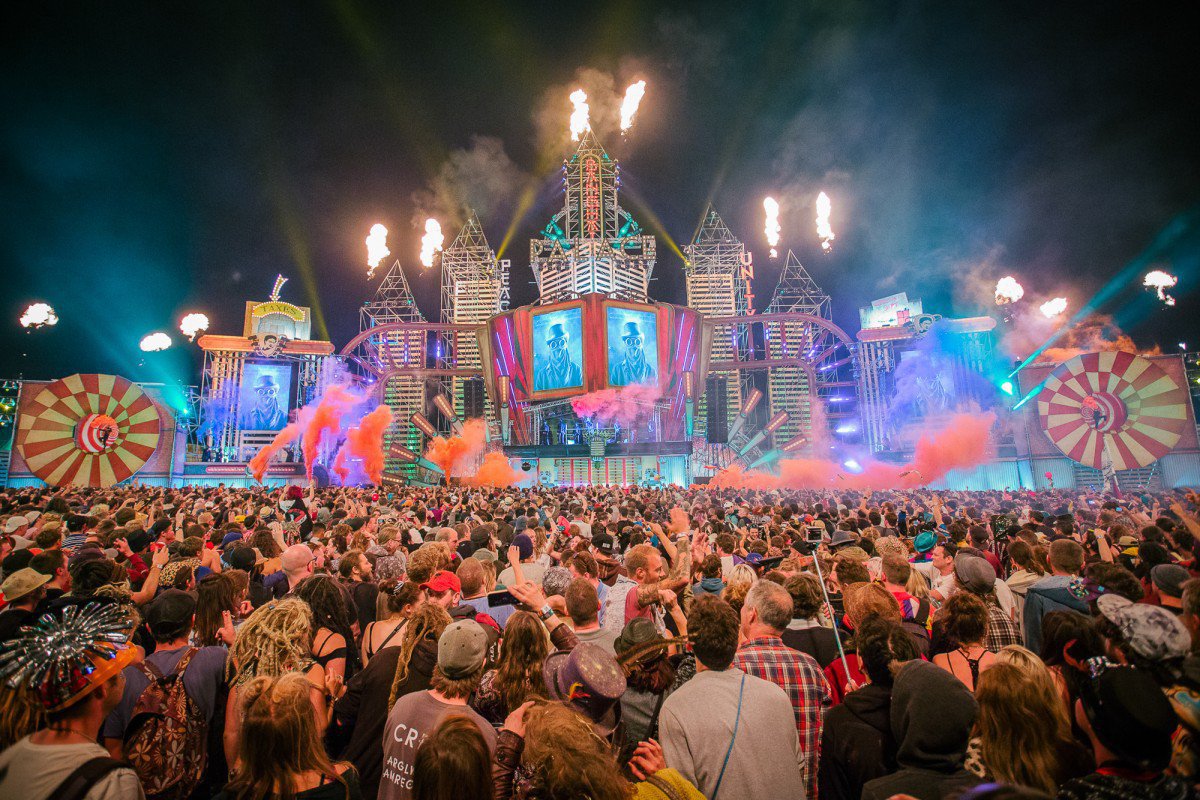 Its concept is nothing like what we’ve known until now. Boomtown, is a phantasmagorical city that organises its fair once a year, in August, writing every time a new chapter, like this year’s revolution, and with new structures like last year’s Bang Hai Palace.

But the city also hosts smaller stories in each of its districts, which are given a soul and a story by some 3000 actors. And if you’re lucky enough to spot one of the hidden groups listed in the welcome guide, they take you to secret places where you can play games before getting your passport stamped. An eleven steps adventure keeps some busy for the whole festival… “Boomtown is a huge engaging festival, says Robert Colling, its production director. We built eight districts, that all look like movie sets. Every district has its own designer that has to design it based on its history. Wild West is on a Far West theme, Barrio Loco on South-American haciendas, District 5 is the science fiction one… For example Wild West as western style streets, a saloon, a bank, a church, a train station… In every building there is a scene, musicians, actors. People come to escape their daily routine, and we provide them with means to do so. We don’t have a real political message, but we use this occasion to share our satirical vision of the World (ed. Bankers are dressed as enormous characters).” 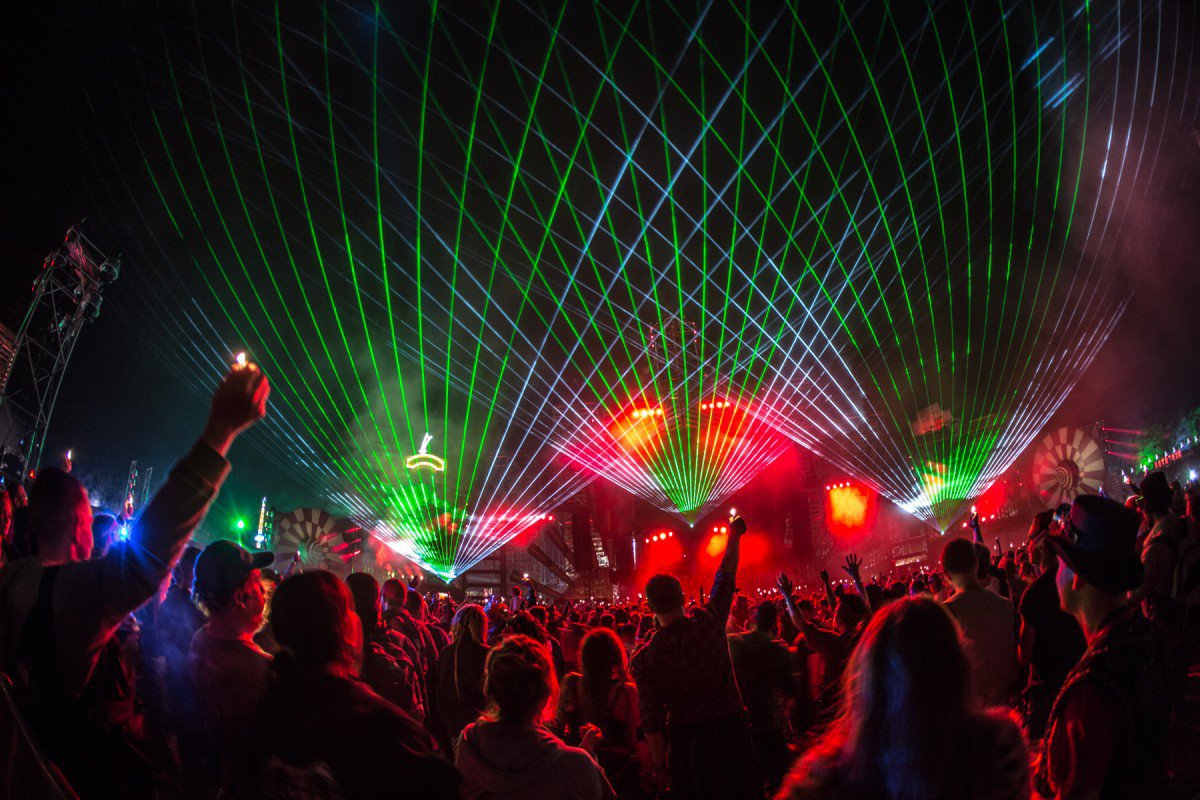 To catch the atmosphere, you need to stumble the alleys, lose yourself on the 40 danceflloors hidden everywhere, play with the comedians. Let’s start the tour by the first level, at the bottom of big hill. After stopping in front of the fire-breathing dragon that guards the town’s entrance, you go through the Chinese neighbourhood, its hundreds of lanterns and its numerous micro-concert rooms and tiny dancefloors populated with rockabillies and party heads with mohawks. Then you pass in front of the Bang Hai Palace from Noisea blasts an inhuman drum, before joining the giant parade that follows a giant steel spider mounted by a crazy looking punk, finally you end up on an utdoor dancefloor where a huge ghettoblaster spits some fat breakbeat.

Futher down the road a roller disco opened, you put your roller blades and you start showing on some smooth nu disco provided by sir Lee Pattison. After that you head to The Asylum, one of the eleven checkpoints, where sketchy looking doctors make you go through weird experiments in a single cell, in order to preserve your sanity, when the medical check is done you get another stamp on your passport and you can proceed with the adventure. Following that heavy treatment you step in crazy merry-go-round and enjoy some straight out of hell drum’n’bass. 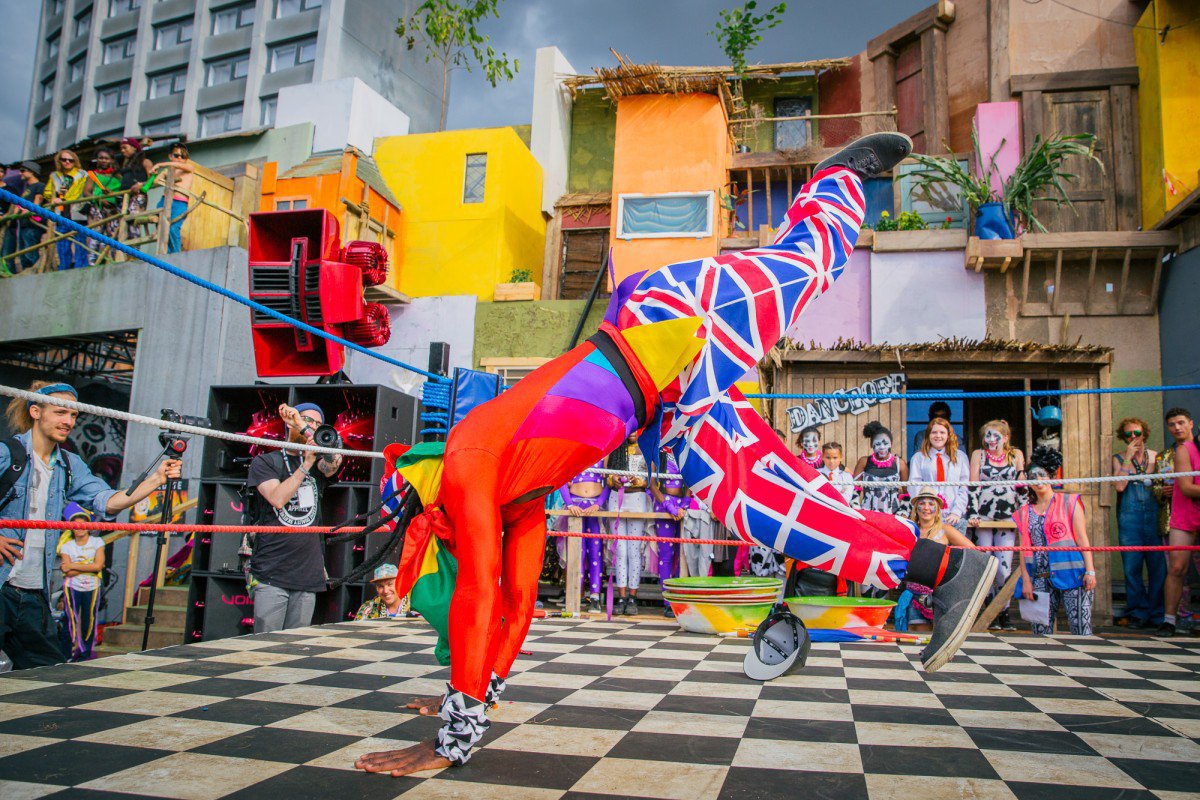 Spiral Tribe comes back from exile

The festival’s program is really turned towards bass music and is particularly British. Last year we counted more than 300 artists, amongst whom we could mention: Goldie, Caravan palace, Scratch Perverts, Shy FX, Orbital, Truss, Squarepusher or Infected Mushroom, but also many talented unknowns. “We cover every genre that you don’t hear on BBC 1, Lak Mitchell, one of the two big bosses, pierced and a cap on his head, in his early thirties, jokes. There are about 20 or 30, but the basics are ska, reggae, techno and drum’n’bass. We’re looking for anything that will make people jump around…”

This time they had the brilliant idea of booking Spiral Tribe, one of the main actors of the English rave scene in the 90s, before wandering around the rest of Europe. “We are really glad we were invited, explains Sebastian a.k.a. 69DB, one member of the crew. We come from this country but we were gone for twenty years so it’s always a bit weird to throw parties back home. It’s cool that they invite oldies, that they don’t forget those who contributed to that movement in the early days. They offered us to organize an “illegal” party in the street like we’re used to. It’s a pirate invasion, we take over the city centre!” Many artists show their good mood on the stage. During The Skints reggae concert in front of a sea of bodies fireworks go off. The lead singer stops to say a few words: “We play all around the world but that festival is something special, it’s the fifth time we come here.Whenever you feel lonely and drained in your life, just think back of all the beautiful things we live together tonight and you’ll feel better…” 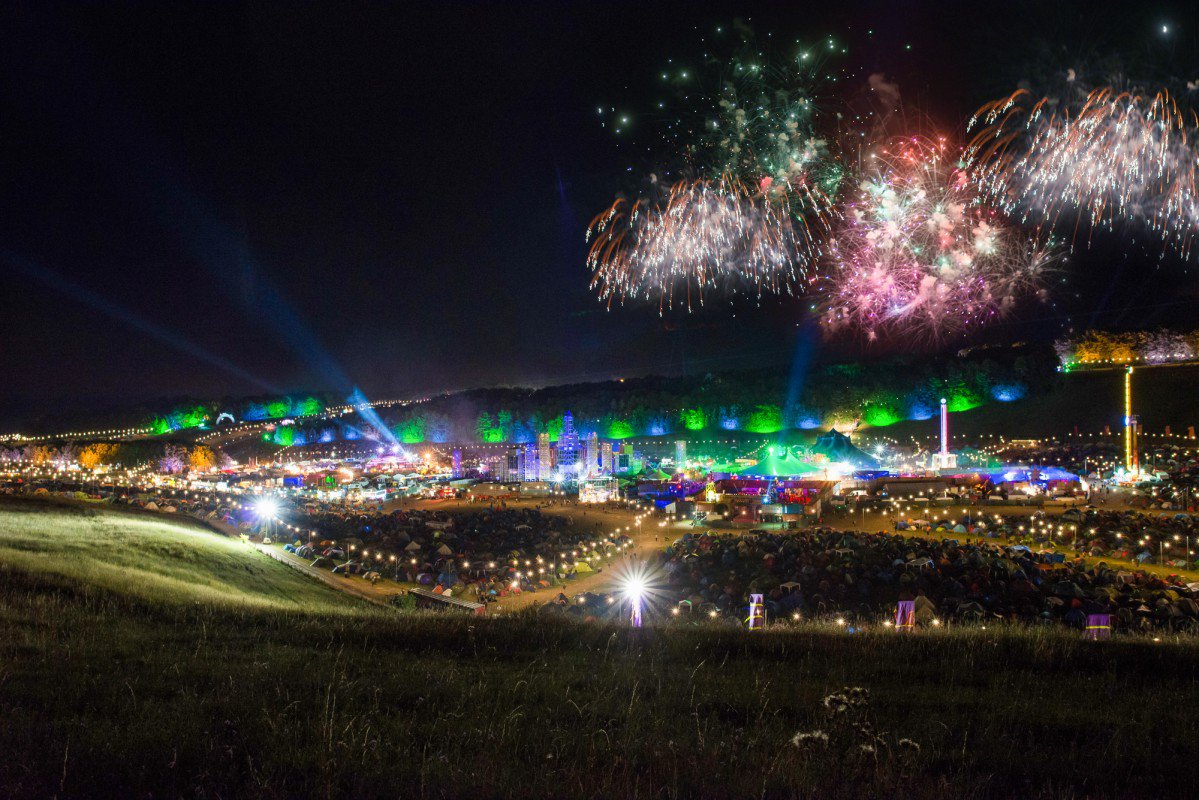 Imprisoned in front of the DJ

It’s time to discover the second part of the set, the original location of BoomTown, on top of the hill. After sweating a body’s worth of water you arrive in front of a ska concert right next to an old abandoned mine with its tools, proceed on the street at the centre of which a Gypsy Jazz occupies the space, eventually you get to the sheriff’s place where the air is pounded by Guy McAffer, or The Geezer, the free-party veteran’s powerful hardtek with a bit of ragga. But behave, policewomen arrest dancers for a bad stare, they dress them with stripy pyjamas and throw them in a cage in front of the DJ. You barely avoid getting jailed, and go on to celebrate in the red light district, where burlesque strippers strip at the windows, while naked robots wrap themselves around poles and a glittery drag queen exposes himself and his strap-on dildo that ends in a fist, his cock and balls happily hanging out of his leather underwear.

A few more steps and you find yourself looking at the laboratory wagon, where scientists in white coat play with things that spit bubbles. Then an English calvados seller offers you a drink, too happy to have a French to discuss spirits with. At the end of the street, a massive pirate ship hosts a concert stage on its open flank, stage on which a bearded, crazy eyed guy swallows a sabre in the middle of the astonished musicians of the balkan beats band, The Woohoo Revue.

It’s getting cold, it’s time for you to get to the fairy woods, where trance enthusiasts move under parties of glowing butterflies, you take a small rest and sit in front the bone fire. Some people hold hands silently “as a token of the fraternity with have in that community” mumbles an ecstatic guy. You let yourself go and put your cynical mind away, after all, your friends aren’t here to laugh at you. 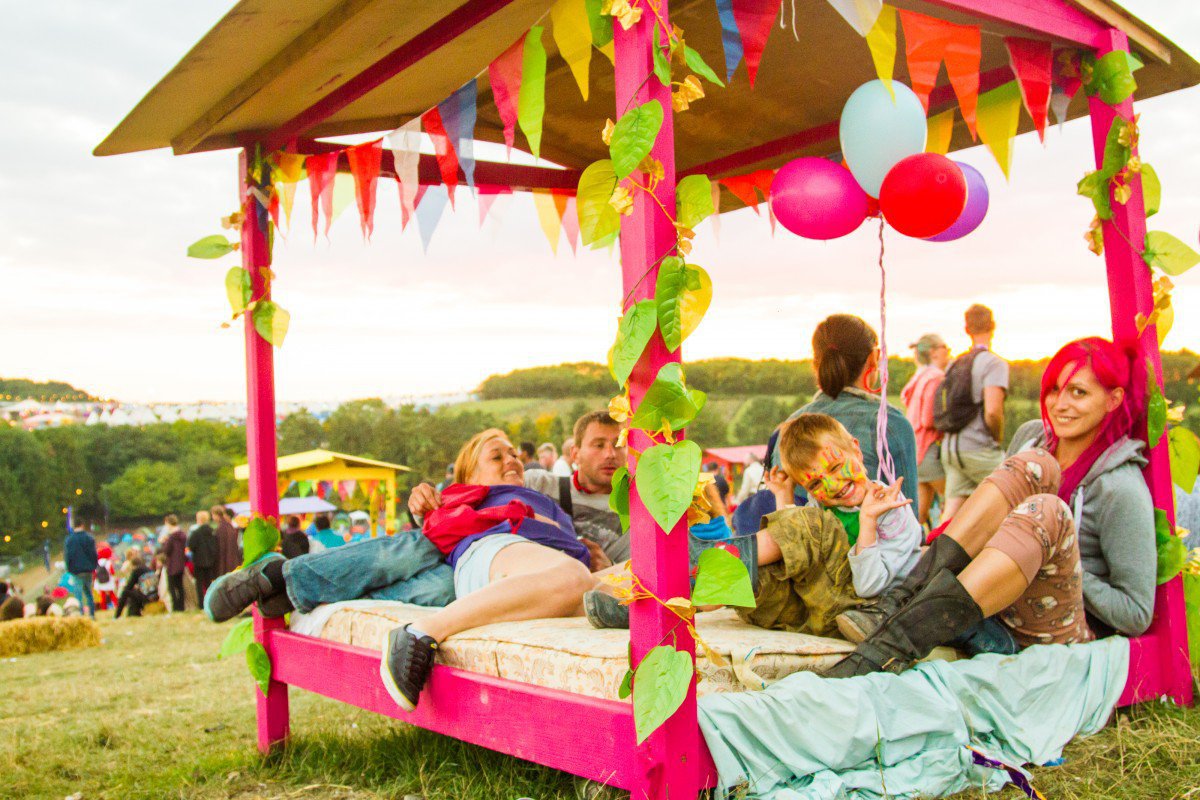 The atmosphere is so cool that a certain spirit develops. We’re not in a regular festival where the main attraction is the headliners. In BoomTown the organizers are alternative festivals and free party old timers, explains Lak Mitchell: “With my crew we grew up in festivals like Glastonbury and the dozens of other one can find in the UK. We lived in vans and buses, Spiral Tribe are a bit like our parents. For fifteen years we organised underground raves all around Europe, we brought our soundsystem, DMT, to teknivals in France. Then we realised that a larger budget we could do much better (ed. The ticket costs between 185 and 234 euros). Today, we have a generation of travellers that wants to organize different stuff, more developed, but what we do remains in the continuity of rave culture. We kept that spirit, it’s not about money but about party. The money we earn is used to organize the best event possible, it’s the first that we actually make profit of it.”

To build their festival, the Boomtown team hired crews that wrote the rave scene’s history. Here you can find the old Mutoid Waste, who are known for having built their Mad Max style structures in the 90s’ free parties in England and all over Europe. There is also Arcadia squad that worked on theme of an alien invasion in the festival. And also Bassline Circus and Desert Storm who work with the team and its Bristol base. “We hire about 150 artistic crews, builders, actors…, adds Lak Mitchell. 10 000 people work during the festival, 6 000 in the street and 4 000 with the artists. Many of which are volunteers, 20% of the public works a few hours a day in exchange for their ticket. If someone comes to us with an amazing idea we help him or her to realise it. We’d rather invest our money on those crews rather the superstar DJs, and that doesn’t stop us from having 50 000 visitors.”

BoomTown’s value is in its many influences, earned in the best festivals… “Fusion, in Germnay, is probably the one we’re the closets to, theatre and circus also have a major place there. But even Disneyland inspires us with its street animation.” 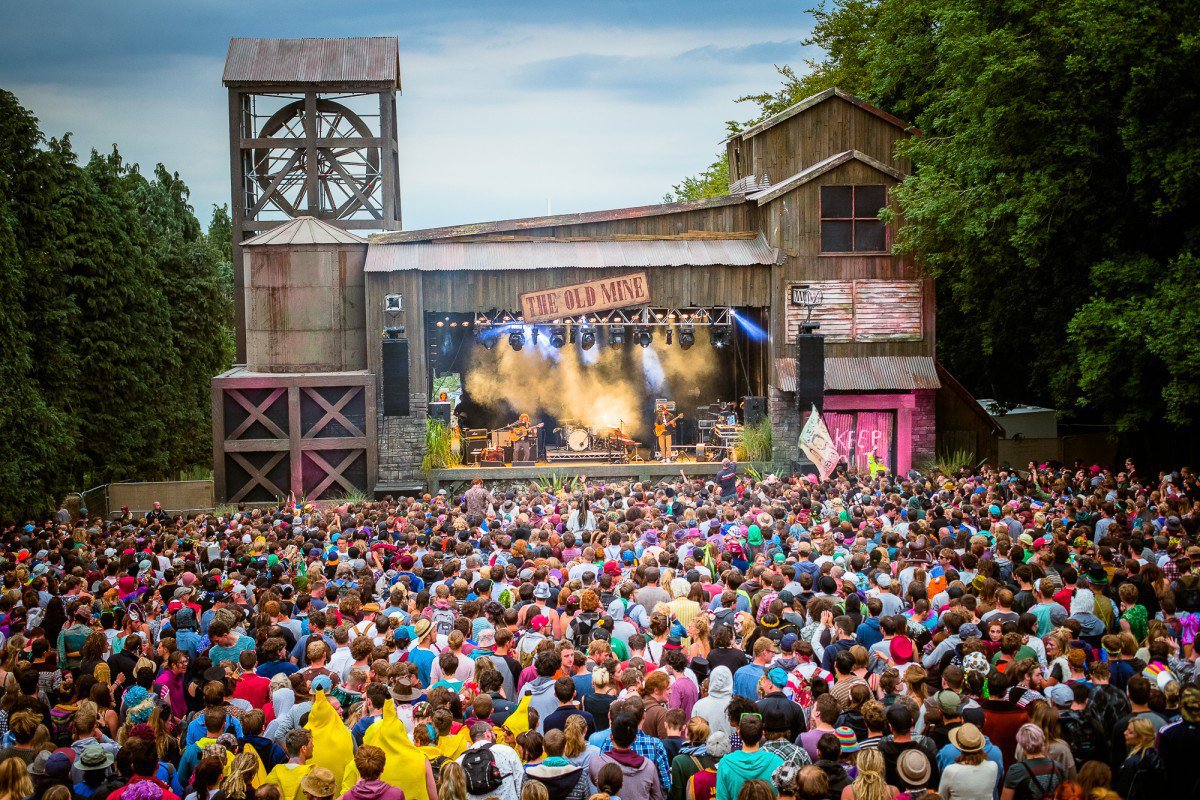 The festival’s concept works so well that its success doesn’t seem slow down. Launched in 2009 in the most independent way, with only 24 000 euros it welcomed 1000 people. The first years, it used to double every edition, today there 10 000 more visitors every year. After changing sites several times the location is now fixed, in the same area of South England countryside, it allows them to store the structures and decorations on the spot in cubicles. The only thing it misses considering its alternative roots, is a political message. “It is true, Lak Mithcell answers, but in the future we will emphasis more on this point. We welcome so many people that we want to take that opportunity to raise awareness about political but also environmental issues. It will consist in speeches, poetry, debates… This Winter, we already organised a big party in Bristol, and we gave away all the profit to Calais’ migrants. And as we speak a dozen of our builders are working on shelters that we’re going to send them.” The revolution announced on Bang Hai Palace’s dancefloor will not exactly take place before next summer but we can already feel the effects spilling over to the French side of the Channel.