02 MIN LI-
RE
Accueil
Tous nos articles
Trax, Mawimbi, Cracki and four cooperating collectives set up their soundsystems at the Nuit Debout
Écrit par Sinah Vonderweiden
Photo de couverture : ©Jacob Khrist
After already last Friday night some big ones of the French techno scene (Agoria, Salut C’est Cool, Jacques or as well Flavien Berger) organised a spontaneous party night, the movement Nuit Debout (that is ‘up all night’) will strike once again. This Thursday, 52 March (which is actually April 21), from 18:30 on, there will again be a party all over the place. But this time with a very special sound-system. And Trax Magazine will be there.

Music doesn’t only calm people down, it also gives way to a certain sort of communication, it liberates the body and connects the masses with an energy of freedom. It is about this spirit, when the Place de la Republique will be occupied again today, for the time of an evening and with a lot of DJs, music lovers, medias and savvy activists, who’re organising this self-made party. And Trax will be part of it.

In line with the night of the 40 March (12 April), a free open air party was realised last week by several collectives that united their forces to support the movement. This time 7 collectives and media stations will come together on Thursday. Cracki (the crew derière the Macki Festival), Radio Mawimbi from the collective of the same name, the hip hop magazine Grünt, the electro-oriental group Jugurtha, the hosts of plenty of other free parties called Microclimat, the DJs of the Wrecka Spinazz Club and, of course, the staff writing your magazine, Trax.

For Alex, Paul and Sam, respectively for the Mawimbi collective, Cracki and Jugurtha, the main objective of this festive pulse is to “raise awareness among the public for issues and debates raised by the Nuit Debout.” On our side will be also the radio stations Radio Campus Paris and Piiaf. The free mag Le Bonbon Nuit will assist as well with their support. What will be played? “Everyone can play what they want: Techno, African or Arabian music, rap … I think, I’ll even play a little punk to please myself!” says Alex Mawimbi. 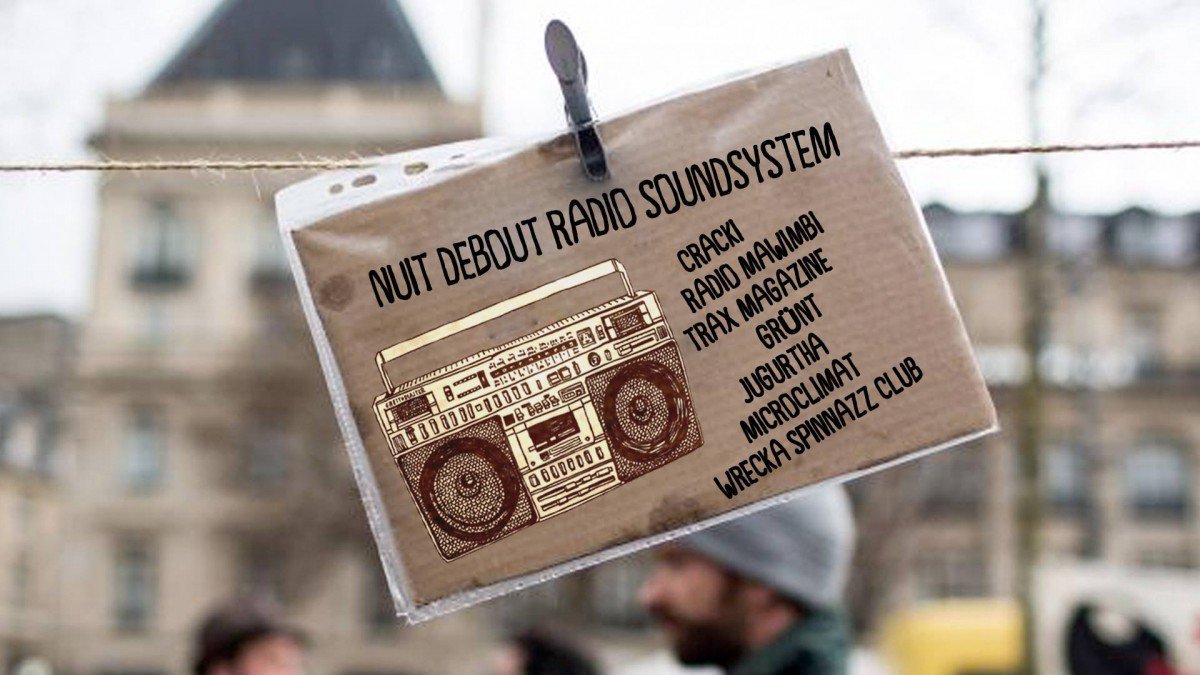 The program features several DJ sets, each about 40 minutes, relayed by a special sound system which works collaborative. The music will be transmitted by using a short-range radio frequency. So everyone is invited to bring ghettoblasters, radios, clock radios, telephones and other equipment to built the sound system, together with all the others. “This allows us not to disturb the actual process of the general meetings and committees working at the Nuit Debout. But above all, the interest is to engage people by making them being this night’s main actors. In the end it helps to prevent the party from taking a turn that could lead to the intervention of security forces.”

For the various collectives, the idea is to integrate partying and music to the heart of the Nuit Debout, rather than only create space for dancing. “This movement is born out of spontaneous intentions, without any real organisation or hierarchy, day by day, and our way of broadcasting music today on the Square is simply resulting from this common spirit. It’s a test, we can not be sure about the result, but the output will be the integration of the self-directed spirit of the Nuit Debout. We probably don’t compass a super heavy sound. But the aim is not at all to transform the Nuit Debout into the Fête de l’Huma (that is the ‘Festival of Humanity’ which is an event organised annually by L’Humanité, a French left-winged newspaper, n.d.l.R.).”