02 MIN LI-
RE
Accueil
Tous nos articles
Tomorrowland reveals its full line up (and it’s not that bad)
Écrit par Thémis Belkhadra
The reign of EDM over Tomorrowland’s line up is not yet done, but they’re on the right track. The complete programme for the event has just been revealed and… it’s not actually so bad. No doubt the result of an evolving scene, an evolving fanbase, and of the company SFX itself, from 22 to 24 this July, Tomorrowland gives more place to the sounds of House and Techno. About time too.  Translated by Henry Hodson.

When we heard a few months ago that SFX Entertainment (the company in charge of Tomorrowland) had gone bankrupt and following cancellation of TomorrowWorld, we suspected that the huge Belgian festival would see a few changes for its upcoming edition. The line-up for the 2016 festival, which again takes place in the town of Boom from the 22 to 24 July, answered all of our doubts. Once more, the festival leaves less stage space to EDM, which has dominated the event for too long.

In reality, Tomorrowland has always been more or less eclectic. Since its first edition in 2005, it would bring Sven Väth, Justice and Armin van Buuren together on the same bill. With EDM winning more popularity as the years go by, we’ve seen the festival grow gradually in favour of the genre. Though popularity has carved the path of its ascent, the festival has not forgotten all about house and techno: there is a number of smaller stages dedicated to those styles.

But Richie Hawtin, Dave Clarke, and Carl Cox all played the role of curators. As EDM has lost a little of the hype that used to surround it, the Tomorrowland team made the decision to set more space aside for the worlds of house and techno.

This year will be no different. Though EDM and its derivatives stay rooted on the main stage and a few smaller ones besides, techno and house have taken over a significant amount of space. Dave Clarke resumes his role as curator while the label We Play House tries its hand for the first time. There’s even a stage labeled ‘Vinyl Only’. But let’s not get carried away, Tomorrowland is far from becoming a festival for musical experimentation or discovery. As usual, the team chose the biggest names in the game, starting with techno pioneer Derrick May.

From there on, it’s a star-studded line-up: Marcel Dettmann, Len Faki, Apollonia, Maceo Plex and Sven Vath. The French flag will fly, with Busy P, Para One and Boston Bun brought together for an Ed Banger Party which promises to be special. See below for the full line up. 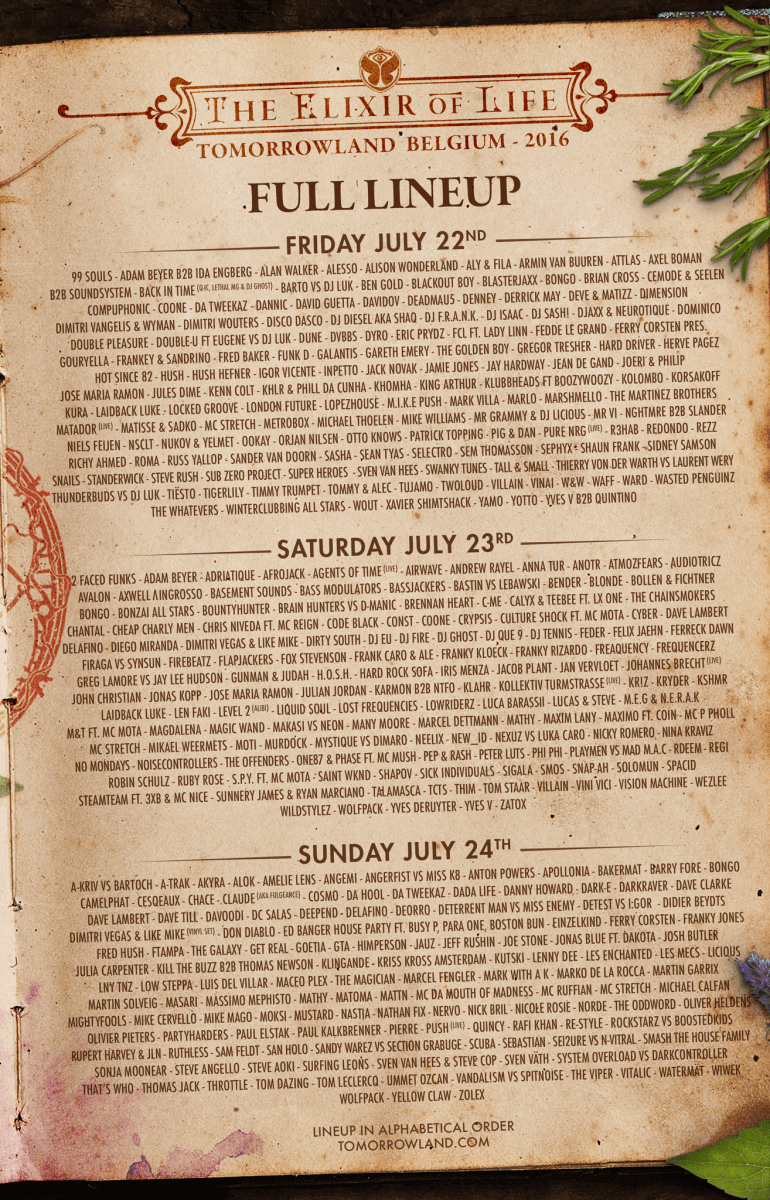 House fans will have their fun, with sets from Jamie Jones and Richy Ahmed. Familiar faces for the most part, but that is not to overlook smaller, more underground stars such as Axel Boman, Sonja Mooneear, Gregor Tresher, Scuba and Locked Groove. Few live sets figure on the line up, but those by Kollectiv Turmstrasse and Agents of Time are well worth checking out.

Now with headliners like Apollonia, Axel Boman and Kollectiv Turmstrasse, Tomorrowland seems to be sharpening its artistic aim and would almost have persuaded us to come. But unfortunately it’s too late: festival tickets are sold out. From now on, at least, you’ll know that Tomorrowland too likes good music.