02 MIN LI-
RE
Accueil
Tous nos articles
Sven Väth spotted watching the Euros during a DJ set
Écrit par Théodore Hervieux
It’s a hard life touring the summer festivals as both DJ and football fan during Euro 2016. You wake up in Ibiza and already it’s time for Amsterdam, where you’ll play for the incredible crowd of Awakenings festival all while the Germany/Slovakia game plays out elsewhere. Sven Väth for one isn’t fazed.  Translated by Henry Hodson.

There’s no denying DJs have seen better times. Balancing performances all over the world and trying not to miss a single match for one’s beloved team during Euro 2016 is easier said than done. While some wait to get back to the hotel and actively avoid spoilers to watch the replay of the match online, the more experienced have developed a certain talent for multitasking.

That’s what German Sven Väth has done, who, after a thirty year career and performances that get more crazy from each to the next, is perfectly capable of spinning vinyl with a close eye on the progress of Die Mannschaft. So here we are in Amsterdam, it is 7pm as Sven takes to the stage at Awakenings. It’s also the start of the second half between Germany and Slovakia. 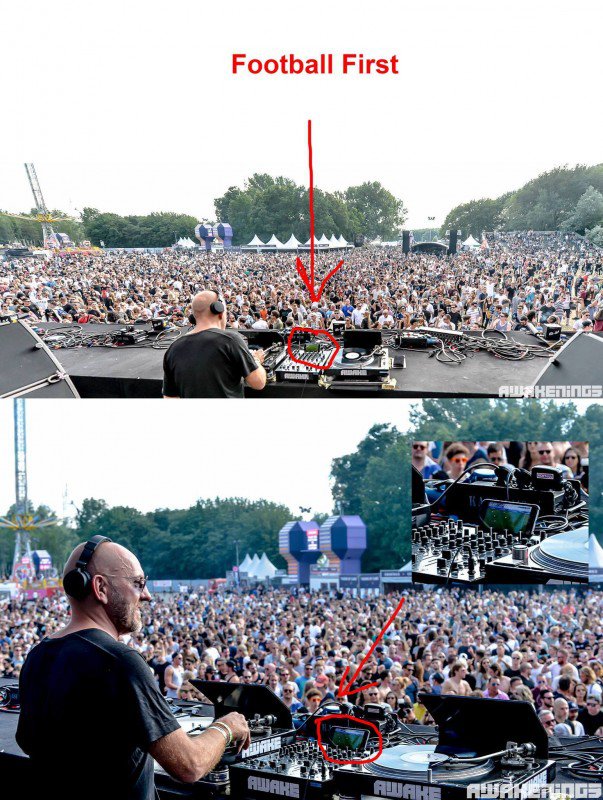 Sven was caught watching the match during his mix, played on vinyl as usual, as the crowd below him went completely mad.   Luckily for him, the Germans had wrapped it up with two goals by the end of the first half (final score 3-0). His set would no doubt have been different if the match had been closer. A great performance nonetheless.