04 MIN LI-
RE
Accueil
Tous nos articles
SoundCloud is now, but what’s next? Five great alternatives
Écrit par Trax Magazine
It seems SoundCloud has been losing momentum in the market for a while now, so perhaps it’s time to think of some solutions. Here are five alternatives. By Arnaud Wyart. Translated by Henry Hodson.

Launched in 2007, following in the footsteps of MySpace, Soundcloud quickly became a reference point for all DJs of the electronic world, notably thanks to its enormous and especially active online community. But the deal they did with Zefr — the business that uses an algorithm to scan YouTube content for copyright — quickly resulted in thousands of mixes deleted for that very reason.

It’s even becoming difficult to find new content on the platform. Worst of all, due to financial difficulties, SoundCloud is now in danger of administration. Rumours already tell of a buy-back by Beats. Luckily, however, there are alternatives — free to use and most importantly without copyright restrictions — for posting and listening to mixes online. And they aren’t all so new to the scene… 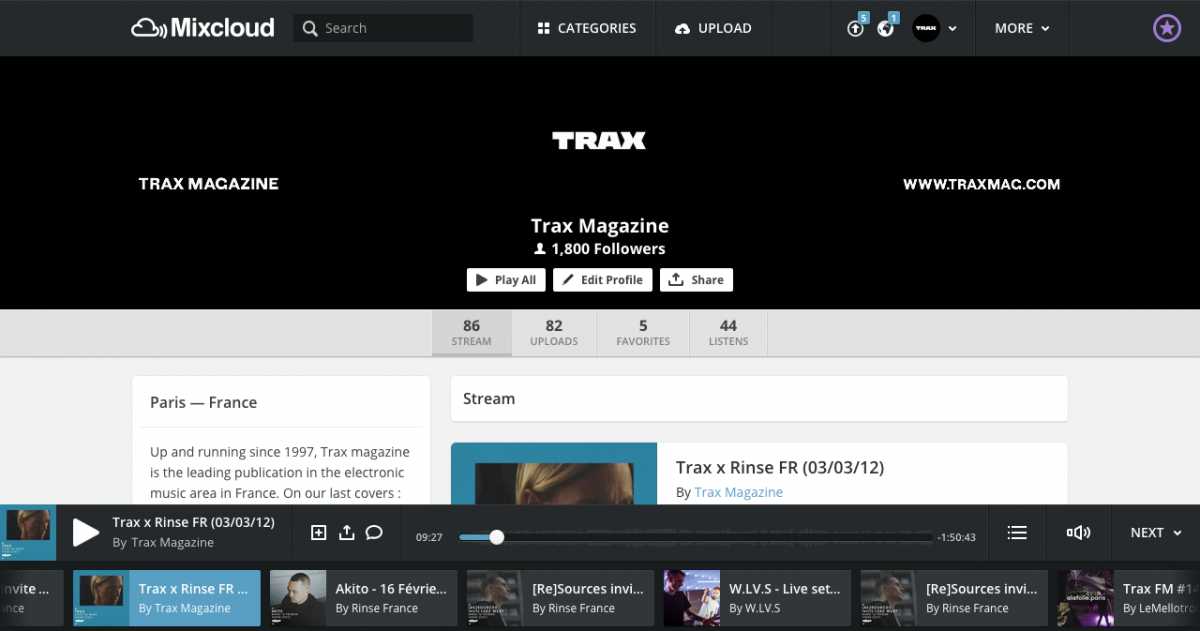 Founded in 2008, Mixcloud is the best current alternative for posting mixes without copyright issues (downloads are not permitted, however). An overall simple and pleasant user experience, the platform is presented like online radio. Standard ‘social’ features are all present (comments, sharing, user lists, social network widgets etc.). Mixcloud has other advantages, starting with unlimited free uploads. It also identifies tracks played in the mixes (putting an end to the immortal words ‘track ID please?’).

Last year, the site launched a tool enabling users to import their mixes directly from SoundCloud. Sure, its audience is smaller, but the community is growing. Its founders estimate the number of monthly users at around 14 million. The only downside: the adverts. But a ‘Premium’ subscription priced at 5.99€ per month solves that problem. Finally, for the artists, radios and labels, the ‘Pro’ pack at 11€/ month offers advanced functionality, more data and thorough analysis tools. 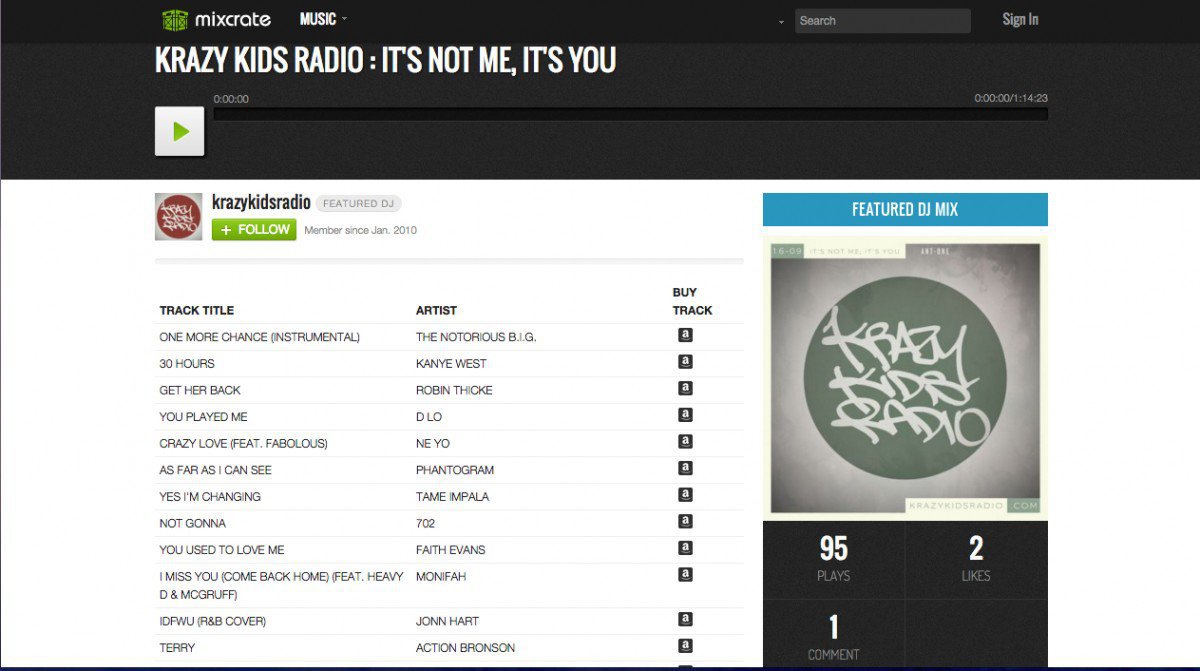 Launched in 2009 in San Francisco, Mixcrate is a platform ‘made by and for the DJs‘. The site is fairly fussy however, asking for ‘real’ mixes where tracks are beatmatched and last no longer than 4 minutes each. Recording is free and unlimited. The only other conditions are that files must be smaller than 190MB, and only mp3 format is recognised. But it’s still enough to make do. The community aspect is well-developed. Members can like, comment on and download mixes (only if the uploader has enabled the option, as on SoundCloud). They can also be shared on Facebook, Twitter and Google+.

The conditions are strict, though: only original mixes, not commercialised elsewhere, and no playlists… If a user should break these rules, he is automatically banned from the community. Note that the site also offers an editorial (though not always bang up to date), consisting of news and interviews. Professional DJs can also use Songkick to put their dates on their profile page. 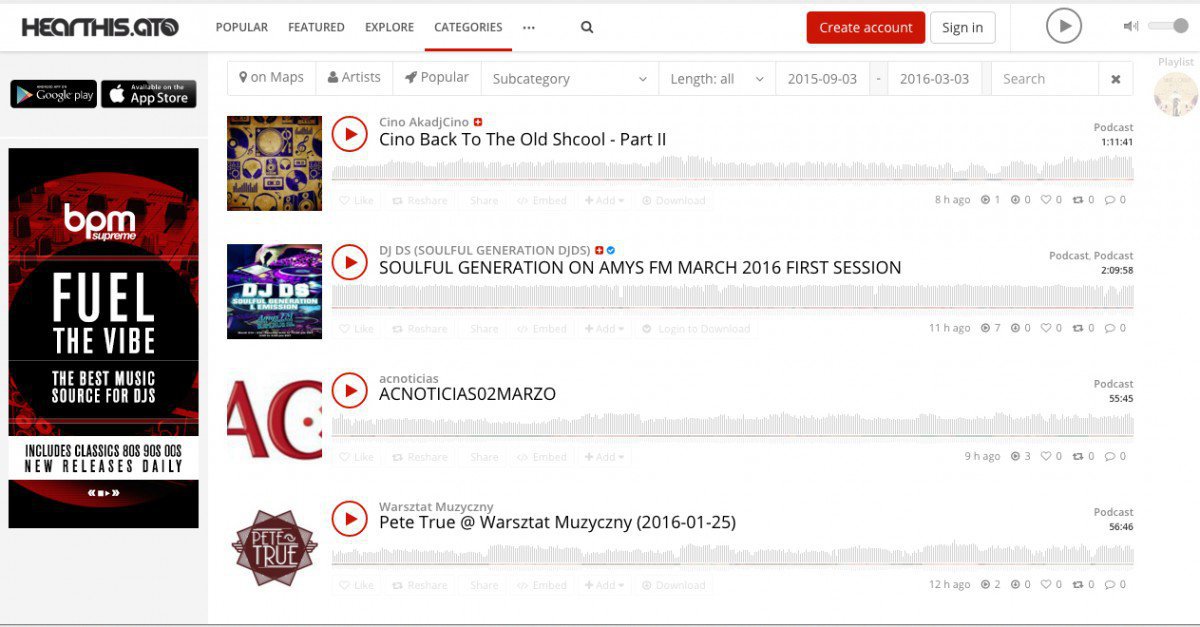 Hearthis is based on the SoundCloud model (with liking, commenting, downloading and sharing features built in), but without the slightest restriction on what is uploaded. The German platform created in 2013 is not aimed exclusively at DJs, but the podcasts and live performances are grouped into categories. Over 700,000 files are available for listening in total. So it’s easy to import a mix. The user can create a free account and has unlimited uploads, but there is a maximum of 10,000 listens and 5,000 downloads for their online music.

For anything more, one must opt for a yearly subscription at 29€. This provides the possibility to import high quality files (wav, for example) and to choose the way of mp3 streaming (from 96 to 320 kbps). In addition, the “Maps” function offers to localize sounds, allowing users to see what’s going on in any particular city in the world. Note that Hearthis also allows you to import sounds (and even whole profiles) from a SoundCloud account. 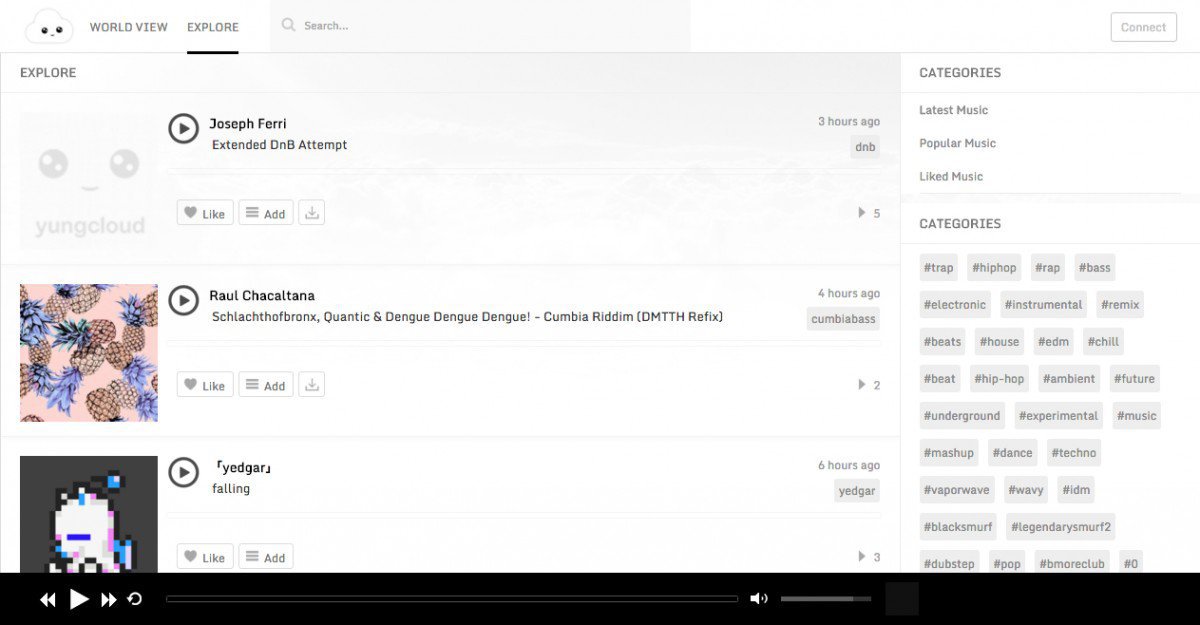 Little known in France, YungCloud hails itself as the new underground platform. Launched in March 2015, this site also looks a little like SoundCloud, only the low-cost version. The user base is still thin on the ground and there isn’t much to listen to, with only 10,000 members and around 20,000 files. However, YungCloud has its advantages: free subscription, profiles that are quick to create, a message system between members, a 50GB storage capacity and no advertising.

Not unlike SoundCloud, the site offers data analysis tools (number of listens, geographical positions and interactions with other users). Besides that, mixes are easy to link to social networks and web pages. There’s even an iOS app under development. A site to look out for. 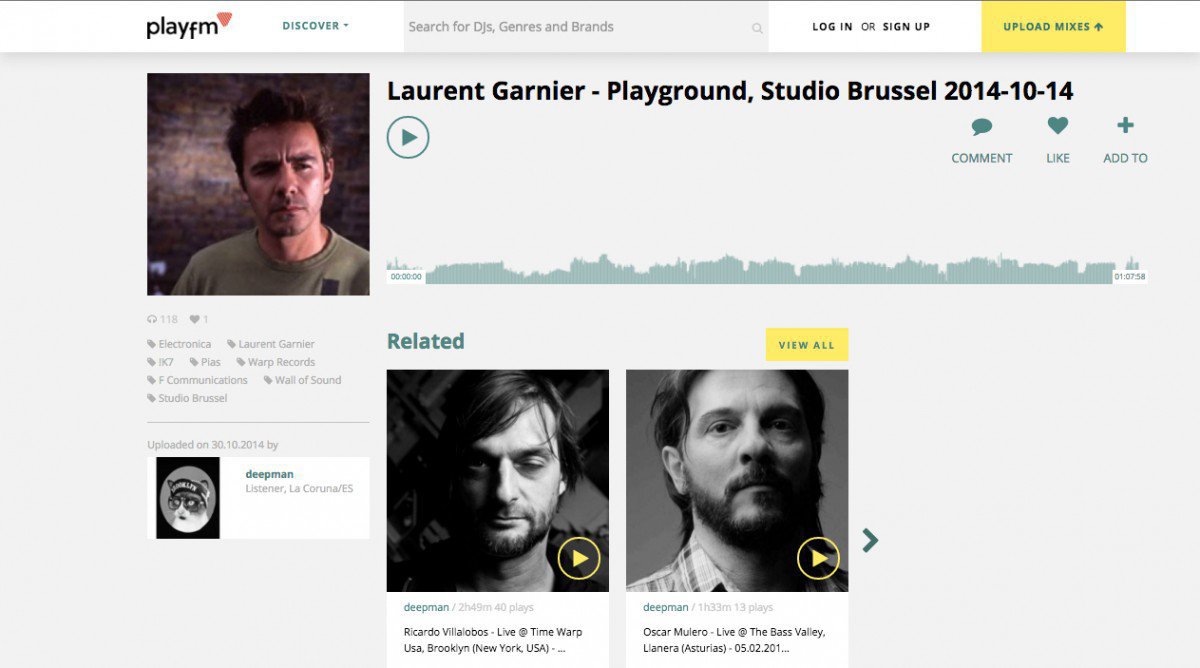 Launched in 2004 in Vienna, Play.FM is a free streaming platform devoted to club culture. It offers CD quality uploads and listening, for file lengths between 20 minutes and 9 hours. Not bad for mixes, concerts and podcasts. Amongst over 100,000 live recordings, you’ll find sets from the likes of Sven Väth, Coldcut, Laurent Garnier, Carl Craig and even Gilles Peterson.

Last year, the design and the interface were revamped for an improved user experience. It is now possible to like and comment on mixes and even add them to playlists. Some channels also introduce you to local DJs, town by town. It’s the best platform for DJs looking to make a name for themselves. Note that there are other sites like this, TheFutureFM to name just one.

It was inevitable really. Thanks to an agreement between Cupertino and Dubset Media Holdings, it will soon be possible to upload mixes on Apple Music (and others are set to follow, according to Dubset). For the moment, we don’t know whether we’ll have to pay to listen to them. One thing is for sure, mixes will be refused by Apple if the tracks played are not in its (or Dubset’s) catalogue, or if the rights holders forbid them being used. On the other hand, it is a way of better paying the artists and potentially reaching the 11 million users already signed up.

Finally, there are certain sites that allow you to sell your mixes and live sets (if you hold the rights to them), notably Hearthis. Otherwise you can upload your performances to Bandcamp. Beatport regulars might equally turn to Beatport Mixes (careful though, it is only possible to play tracks bought on the platform).