04 MIN LI-
RE
Accueil
Tous nos articles
[Report] When the godfather of psytrance Raja Ram turns 75 in Tel Aviv
Écrit par Thémis Belkhadra
Photo de couverture : ©Thémis Belkhadra
0 Partages
On Wednesday April 6, an historic event took place at Block Club in Tel Aviv. It was in this room – one of the craziest in the world – that the “godfather of psytrance”, Raja Ram, came to celebrate his 75th birthday. For over forty years, the mad Australian has dedicated his life to psychedelic culture, from its rock leanings to more electronic vibes. We were there to celebrate the special occasion; the right opportunity to reflect upon a long, winding career of successes around a set which sent us floating to the heart of psychedelic culture. Translated by Sinah Vonderweiden.

It might seem to defy all logic, but it was a techno club where Raja Ram decided to meet his audience for a celebration of his 75th birthday. But we stop short of questioning, when the set is played over three different rooms, each totally unique, in which sound is the only constant. Hidden away in a deprived area of Tel Aviv, the Block Club is located in a vast urban complex that combines the central station with a shopping center. 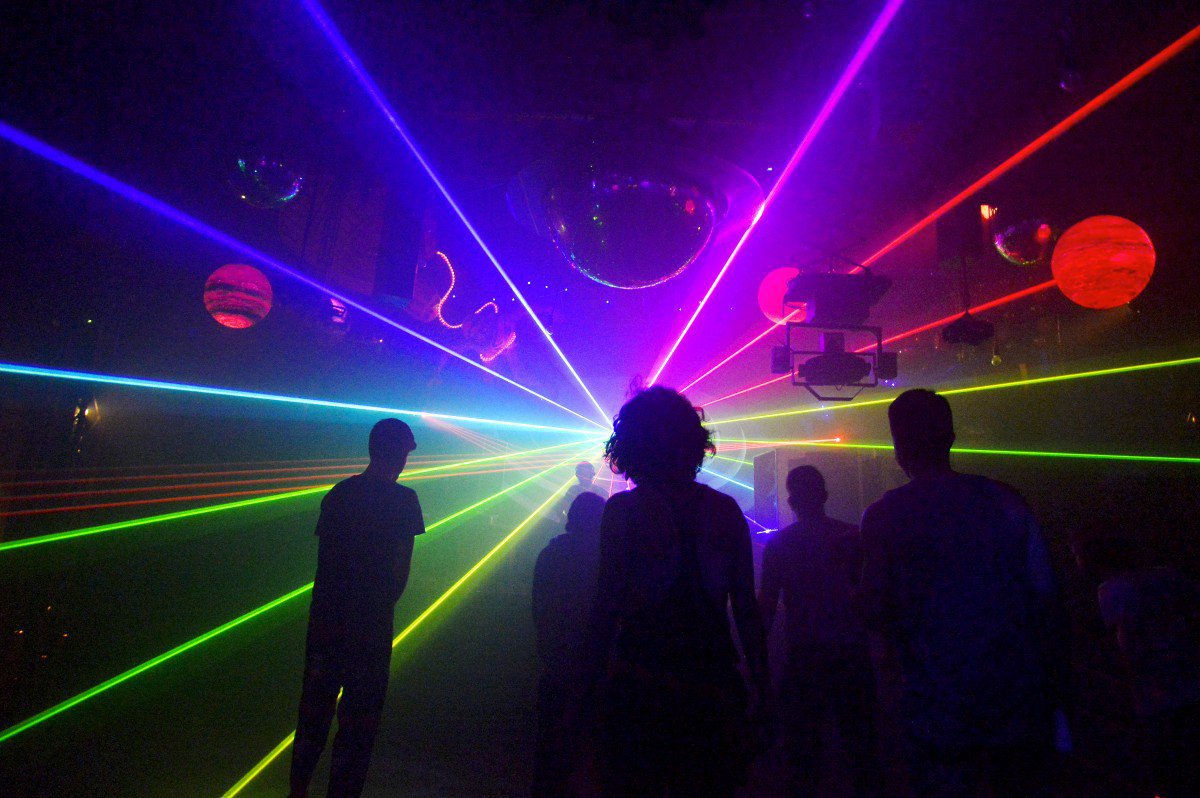 Welcome to the Block Club

At the entrance, the smell of incense announces that techno will give way tonight, evoking the roots of Indian psychedelic trance. The evening starts with the Block – the main stage – enwrapped in a galactic sky scene and supplemented by a bright tunnel of light to captivate the crowd all night long. A psybient live set, presented by the talented Group of Light, welcomes the early birds with multicoloured lasers. 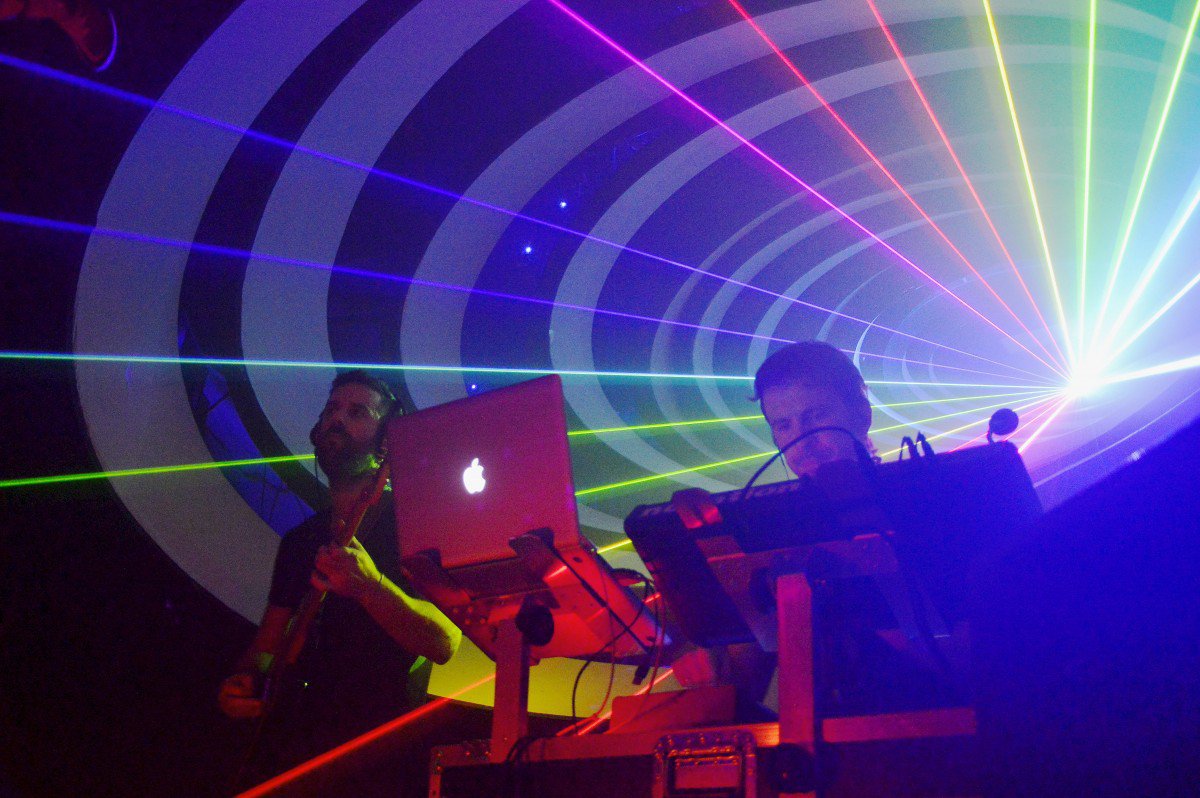 The psybient appetizer, live with Group of Light, beneath a hypnotic laser show.

The huge sound system at the Block Club is unique. It impresses immediately with six towers each two meters in height, standing tall over the crowd, but mainly by the deep oscillating vibrations it sends out. The sound fills every corner of the room. 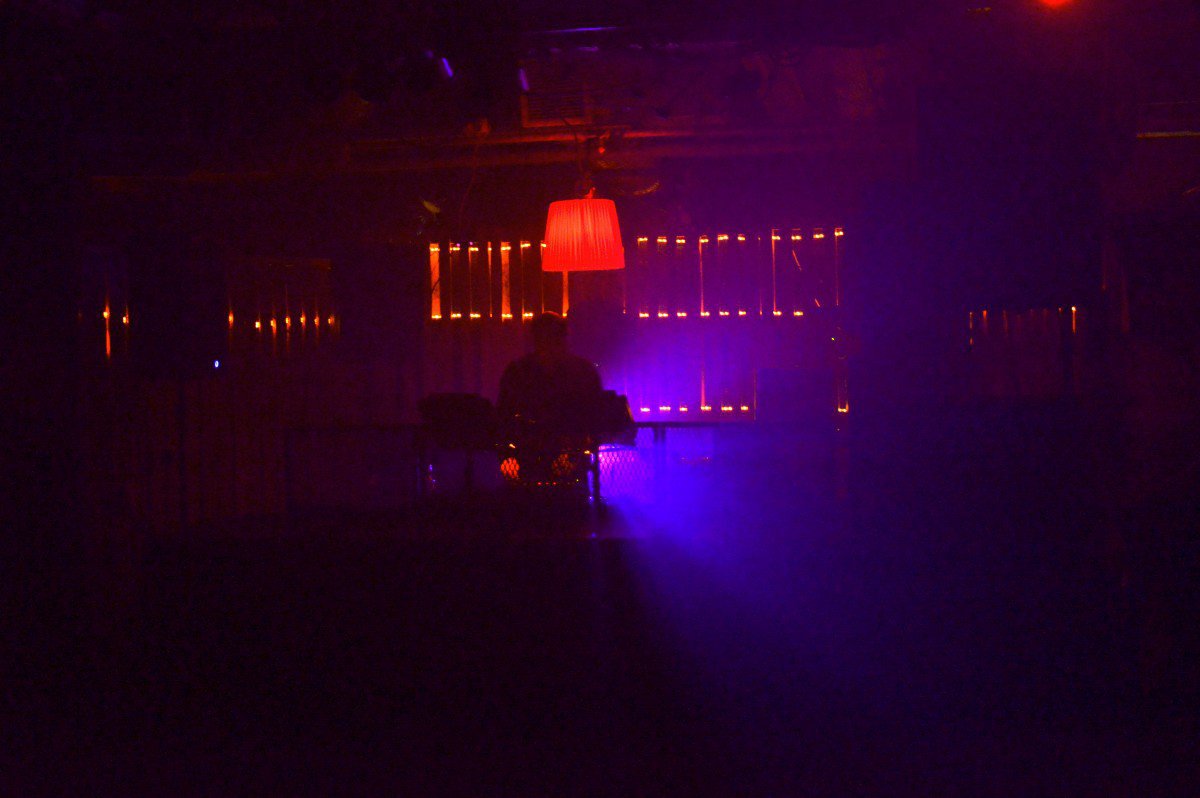 Inside the Squat – the second floor – the psytrance is already hitting hard. A resident DJ delves for its deepest, darkest sounds, perfectly matching the gloomy atmosphere. Thick smoke cloaks the beats as they ambush our ears.

The third room, the Lounge, also serves as the club’s smoking area. Tonight it features less of the usual house and techno, a pleasant break for some. Sinking into the sofas, enjoying a cigarette in this sonorous space, the room provides a feeling of comfort almost unknown to the Paris crowd – where smoking rooms more closesly resemble tiny closets. 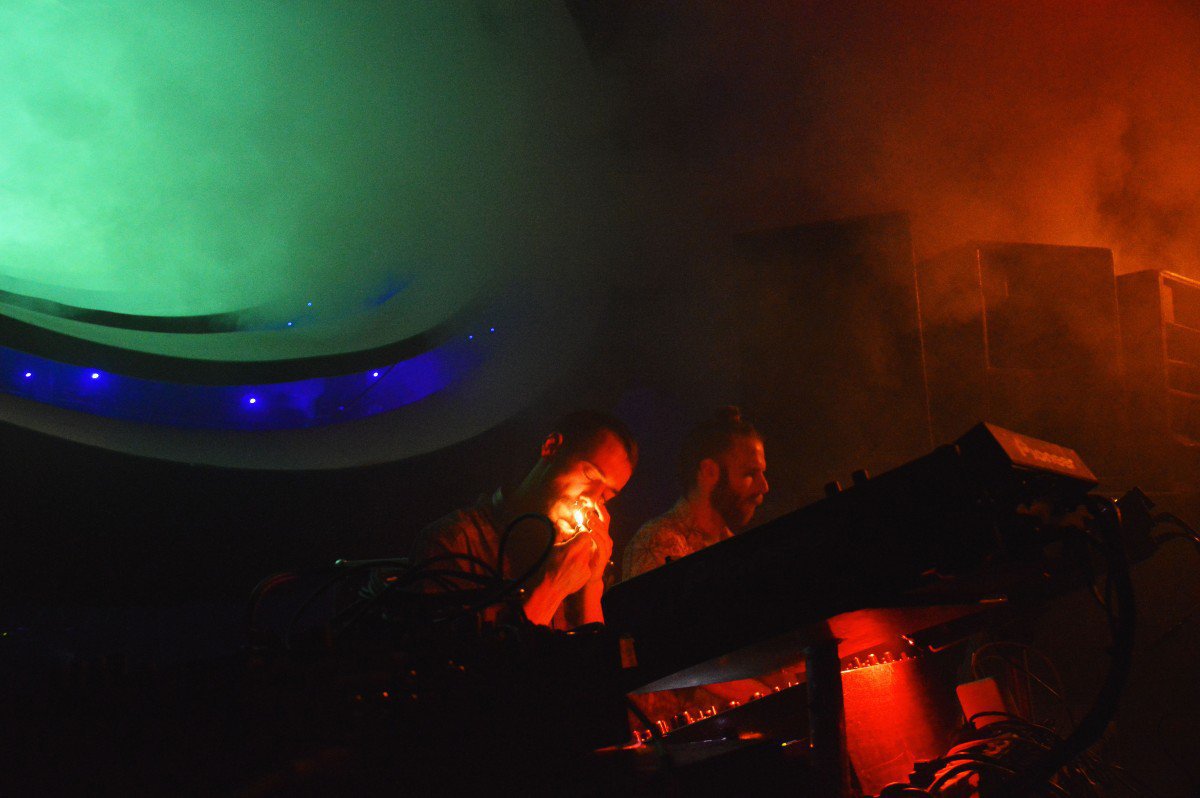 Empirikal speeds the smoking tempo while a cigarette’s hanging in the mouth angle.

The duo Empirikal takes over the Block and now the room is packed. They gently boost the crowd with a progressive and rhythmic set, preparing step by step for the entry of big player Raja. At about two o’clock, he appears on stage to tremendous applause and hysterical screams.

The response of the crowd is amazing. A girl in the front row tears at her hair and a wave of strobes refelects in her eyes. It’s worth noting that the career of Raja Ram has run for over forty years now. He is a real star in this country, where psytrance is pretty popular, and where he organises the T.I.P Festival each year. 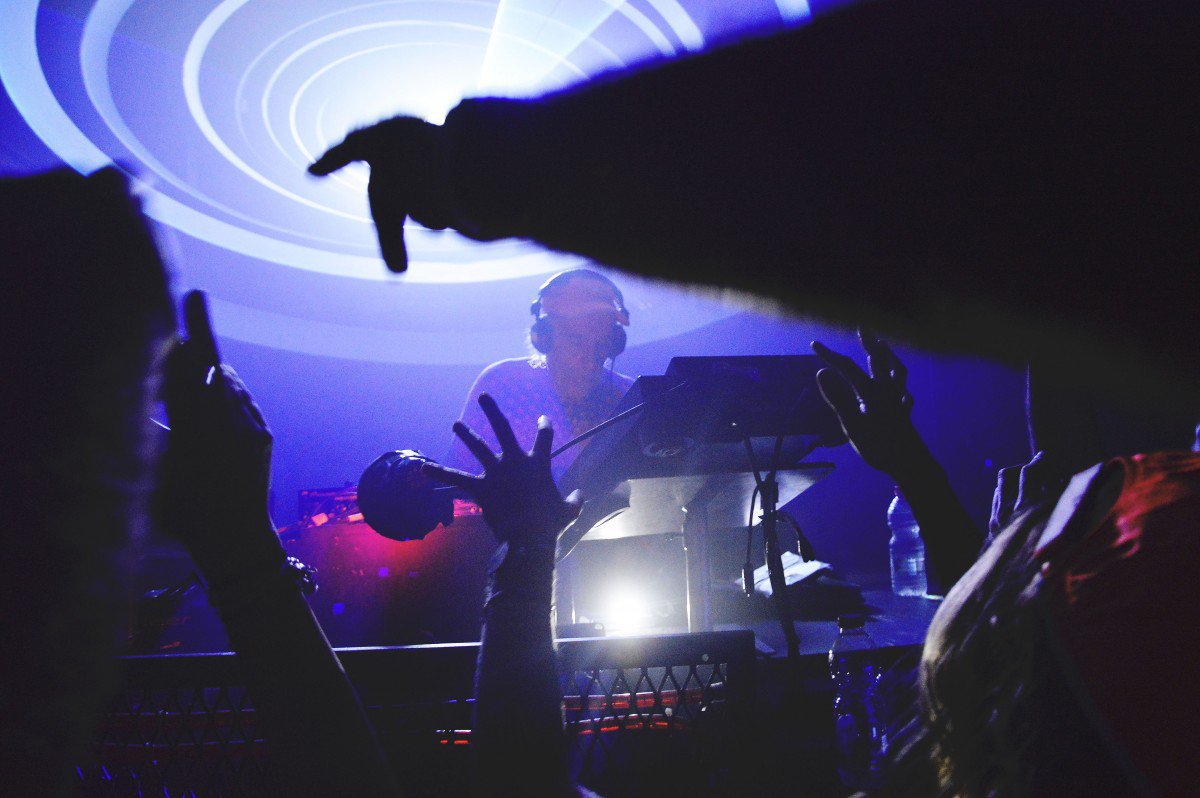 The crowd goes mad as Raja Ram shows up behind the decks.

Born and raised in the hippie culture, Ronald Rothfield aka Raja Ram spent a part of his childhood living the beatnik life, between India and Europe. He would discover Australia a little later and learns to play the transverse flute, his favorite instrument, one he would never in fact put down. In 1969, he founded Quintessence, a psychedelic rock band entertains crowds all over the world. The band appeared at the first two editions of Glastonbury Festival, and would cross paths with David Bowie, Led Zeppelin and The Who. Raja Ram finally returned to the quieter and more simple way of living, ten years later, in Australia.

In the 80s, acid house and techno revive his regretfully lost love for music. At Goa, he would meet Goa Gil, founding father of the rave party and its community, with which they will give birth to goa-trance a few years later. In 1994, he founded his label, TIP.World, which has continued to gain popularity ever since.

His best known project is certainly Shpongle, the label he has led since 1996 together with Simon Posford (aka Hallucinogen). Their unique style combines influences of electronic sounds, world music and rock: Pink Floyd meets Ravi Shankar… on acid. An absolute revelation for many artists, as the project also created the scene psybient, now with its numerous sub-genres.

Even at 75 years of age, Raja Ram mixes on his turntables as if he never aged. The crowd goes crazy even faster than the music played. He attempts to take no notice throughout the set, with all the camera flashes, pushy fans, and even some record thieves. 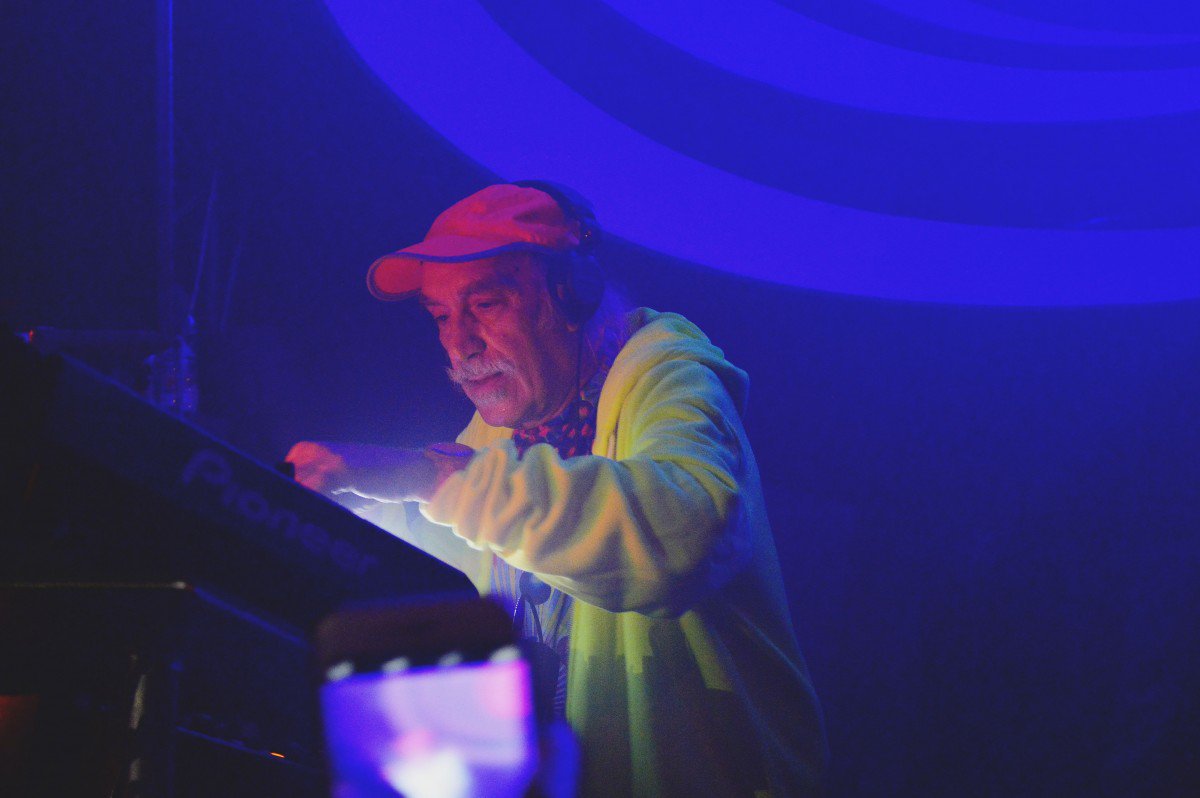 First, we set off on a space-time journey to the core of psychedelic culture and his personal projects. He puts us, at first, on a hovering rock, taking us back to the roots in the 60s, and lands somewhere between San Francisco, Sidney and Kathmandu. The Australian goes on with some goa tracks from the era of The Infinity Project. Then he gradually leads over to some progressive, to the full-on and finally some titles of 1200 Micrograms, the project he shares with Chicago.

Naturally, he drops the hit remix “Free Tibet” by Vini Vici, which does – naturally – have the impact of a bomb on the dance floor. But it’s a rework of “Divine Moments of Truth” by Shpongle, a true psychedelic anthem, which finally carries the crowd away. 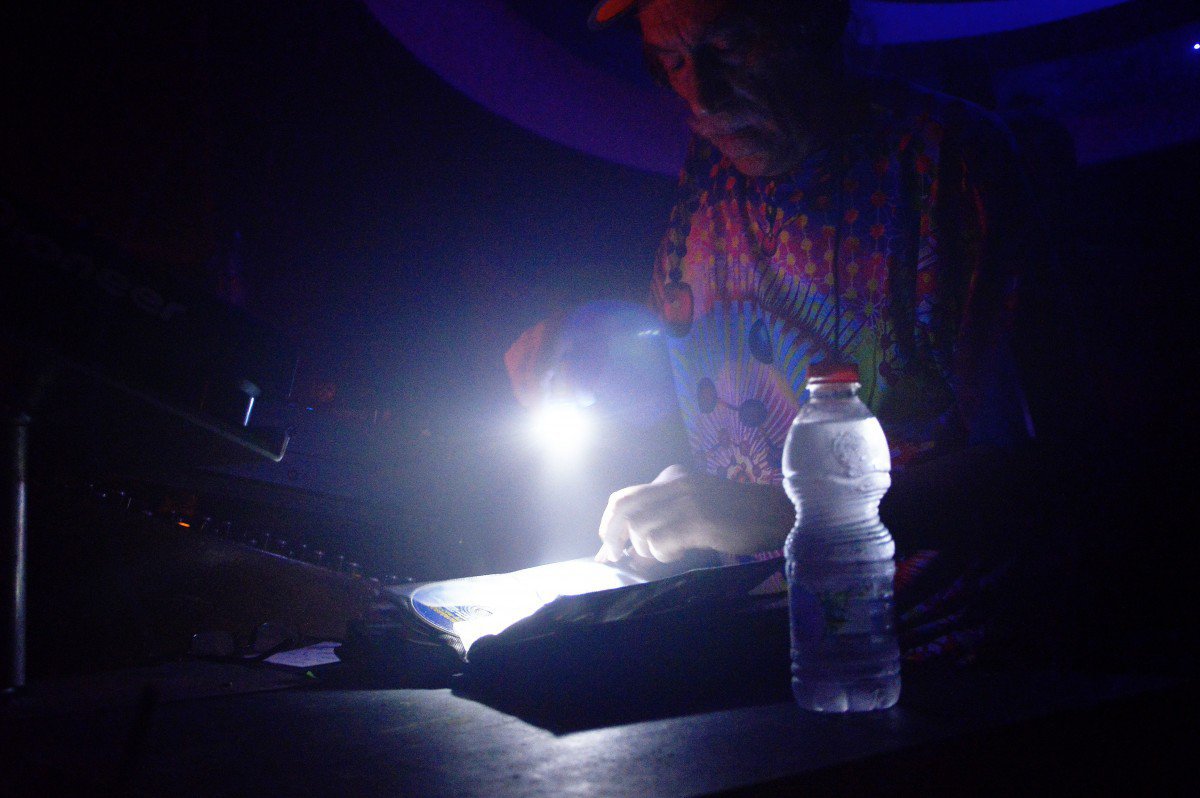 With each new melody woven in, Raja Ram’s grin lights up and he starts to act like a real showman. Joined by a strobe light that shines to all directions, it seems to translate each gesture of him with every single move. The incredible energy he releases is unlike any seen before, a fact all the more surprising for an artist of his age. This evening will be remembered for the high quality of the soundsystem and the light show provided by Block Club, but also for this historic set mixed by Raja Ram, which was enough to satisfy all lovers of powerful and psychedelic music. 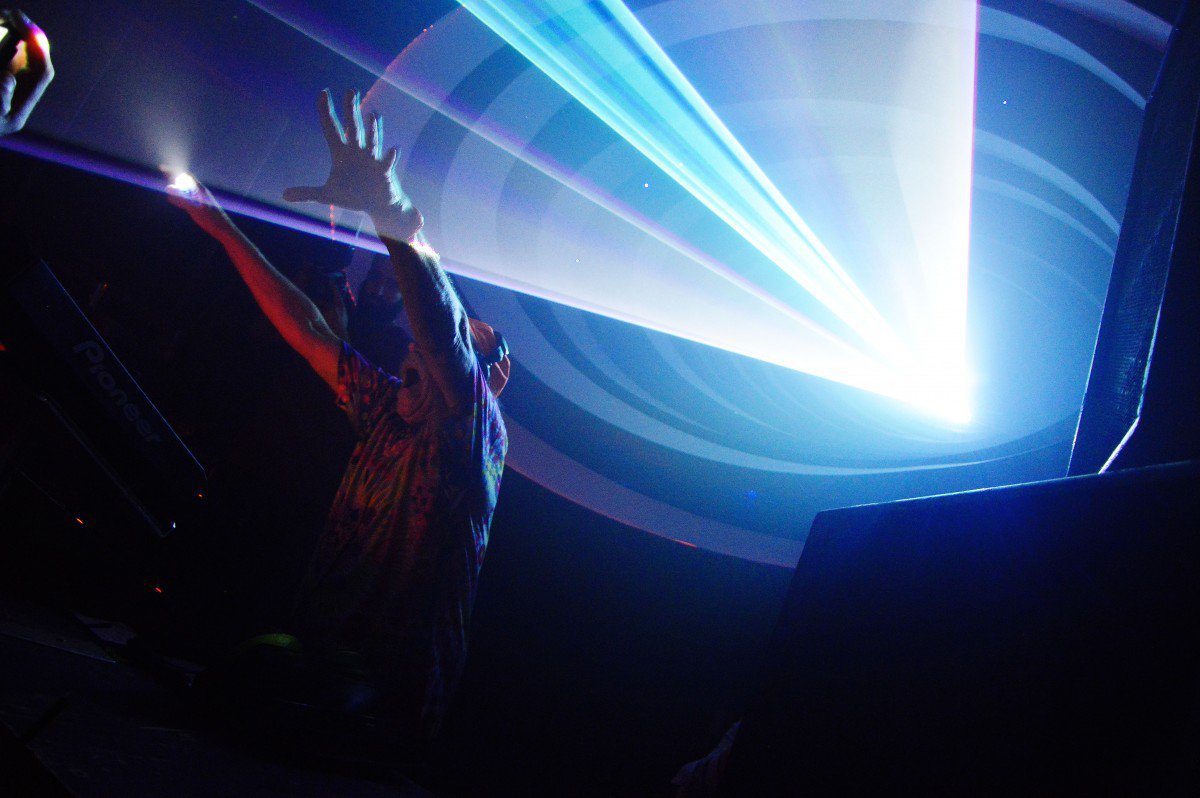 Astrix now takes over the decks of Block and plays a more than respectable set, with special help from his amazingly composed new album He.art. He presents a more gentle kind of music, with fewer harsh rhythms and some original melodies. As the room is more empty, a warm energy takes over the main floor. We put away the camera and tribal sounds offered by the brilliant producer capture the minds and bodies that benefit now from the extra space to express themselves on the dancefloor.

The evening concludes with a few fast paced hours between the three magical halls of the Block Club, a temple for electronic music in the Middle East. 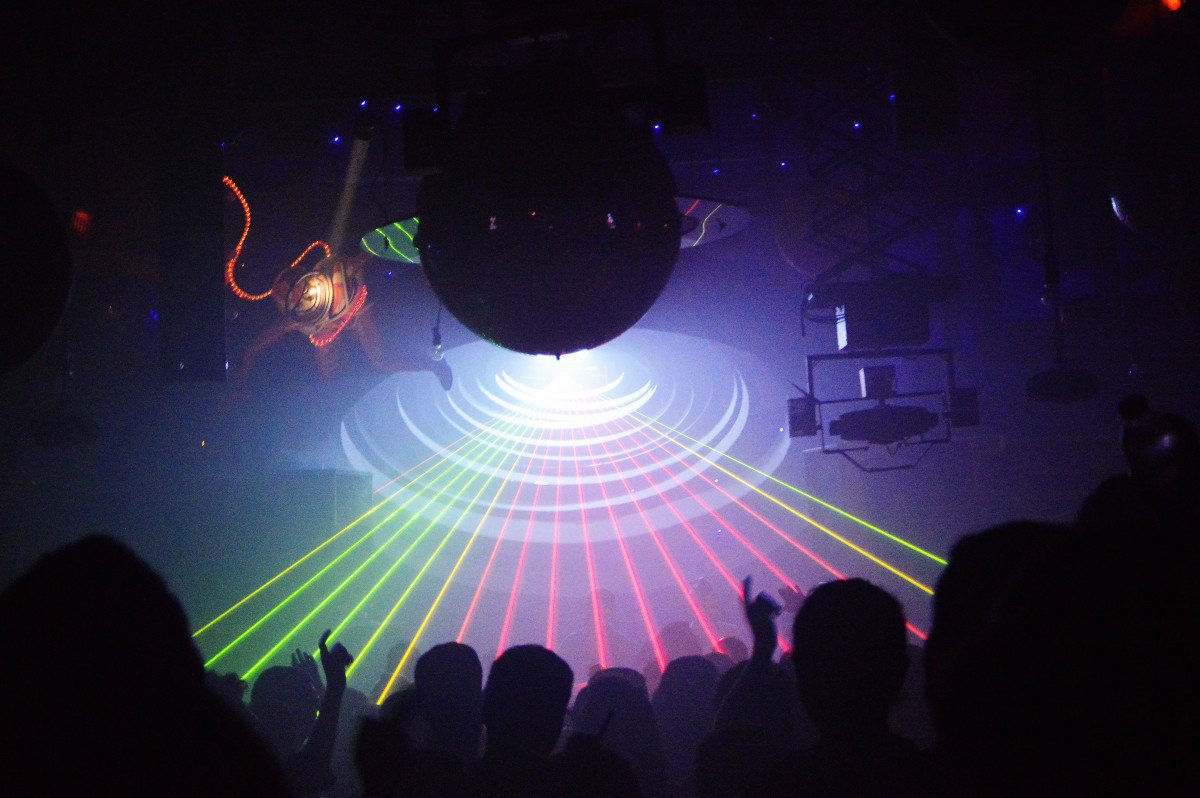