04 MIN LI-
RE
Accueil
Tous nos articles
Radiohead: 16 of their most electronic songs
Écrit par Pierre Serafini
Of all the bands to come out of the 90s, few can lay claim to as big an influence on contemporary music as Radiohead and their frontman Thom Yorke, despite the twenty five years that separate them from their beginnings. Shortly after the Youtube release of the single ‘Burn the Witch’, the first piece from their hugely anticipated new album, we wanted to return to Yorke and the Oxford band’s most intimate flirtations with electronic music. A playlist pleasing for fans, and revealing for those unfamiliar with some of their most essential work. Translated by Henry Hodson.

Here is a playlist with every song described in order below. If you prefer, you can listen to each in turn via their individual player.

It is the year 2000. Jonny Greenwood picks up his Analog Systems modular synth – long before the renaissance of analog in current techno – to write one of the tightest, most millennial-angst-ridden rhythms to grace the air of that age. He also samples an idol of his, Paul Lansky, borrowing the universally known signature from the song “Mild und Leise“. Thom Yorke’s vocals would do the rest. Indisputably the most electronic piece on KID A, and the one most emblematic of the risk and rupture the group took with the album.

Taken from the EP Com Lag, a collection of B-sides from the album Hail To The Thief released exclusively in Japan, where the records are more expensive and the fans more loyal. The band used a loop of the first bars as they plunged the crowd into darkness to lead into the rest of the show on their 2003/2004 tour. Immersion in 30 seconds or your money back.

Thom Yorke’s most accomplished side-project to date, Atoms for Peace brings together Flea of the Red Hot Chili Peppers, Radiohead’s sound engineer Nigel Godrich and a handful of other friends on an album that many considered at least as important as a new Radiohead release. A particular mention goes to the sterling synth and rhythmic work here.

A masterclass in sampling and drum machines in this song from Hail To The Thief. The reverb-drowned vocals and imposing lines of sub-bass are bound in permanent tension by conceits of percussion and effects. Listen with headphones to fully appreciate the production and sound spatialisation. A real mixing triumph from Nigel Godrich. 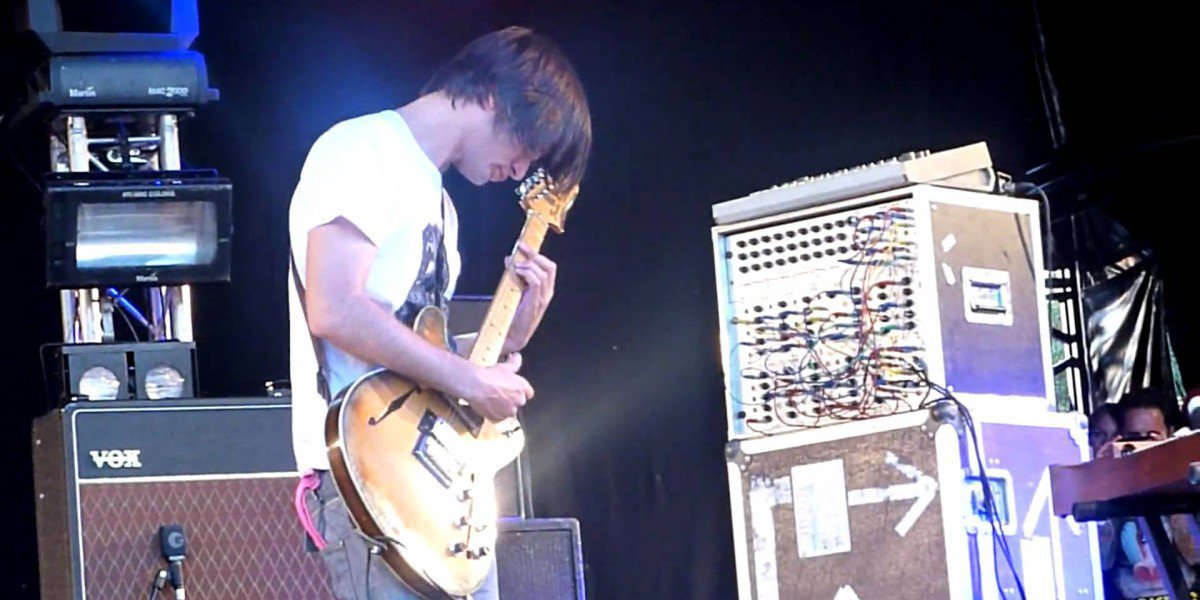 Radiohead – Packt Like Sardines in a Crushd Tin Box

Album opener from 2001’s Amnesiac, the siamese twin of KID A, proudly states its intent. Almost every element except the vocals is electronic in this song. The drums are played live by Phil Selway but trigger electronic sounds all the same.

Radiohead – Sit Down Stand Up

The second track on Hail To The Thief takes things ever-progressing to heights of an apocalyptic post-Jungle on DMT. Tip: if you are a DJ and you’re closing a night, give this one a go after some Source Direct for example. Thank me later.

Eponymous track from the album that needs no introduction. An unstoppable, polyrhythmic synth progression. The special manipulation of Yorke’s vocals here echoes the following song in our playlist.

The depressive interlude from OK Computer, created with the aid of MacOS Text To Speech, Fitter Happier is an indictment of the alienation felt by subjects of modern western society. As the striking images, scanned by a lifeless voice, follow on from one another, they seem to make a sinister nod to the world of Kraftwerk. The collective anxiety on cusp of the 21st century, a theme dear to the group, makes itself acutely felt in this song dominated by the electronic. 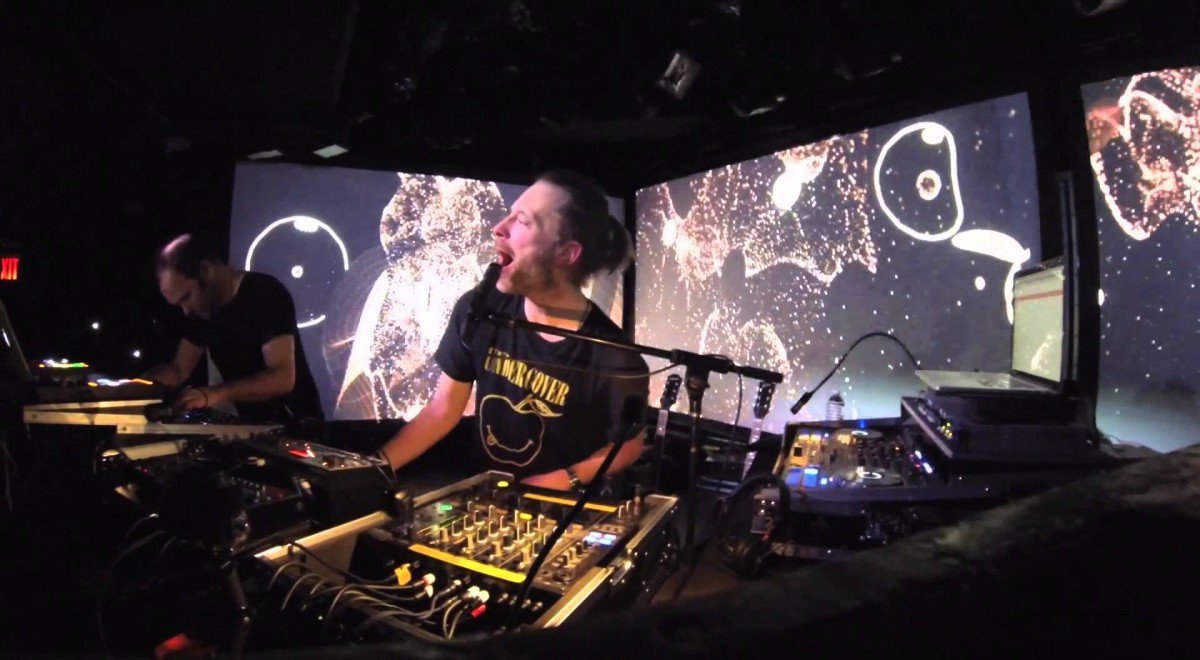 Another B-side, taken from the second disc of the Amnesiac collector’s edition. Here we find impressive work on the delays which set the rhythm in perpetual motion, with the support of looped vocals and a ternary time signature.

Somewhere between Flying Lotus and the footwork of DJ Rashad, Yorke includes this rather unique composition in his latest solo project Tomorrow’s Modern Boxes.

With veritable ‘The Gloaming’ vibes, this track is the most sub-bass soaked cut in the band’s discography. The drums take inspiration from Afrobeat phrases to give more of the floor to a monumental low end. Recommended to all who own a subwoofer.

Another song where the vocals find themselves especially touched with effects. Shattering the image and roles of the regular Rock band is part of this group’s DNA. Many sounds from sources unknown here, but an equilibrium that reminds us of the talent of Nigel Godrich in showcasing even the most bizarre ideas of the band. 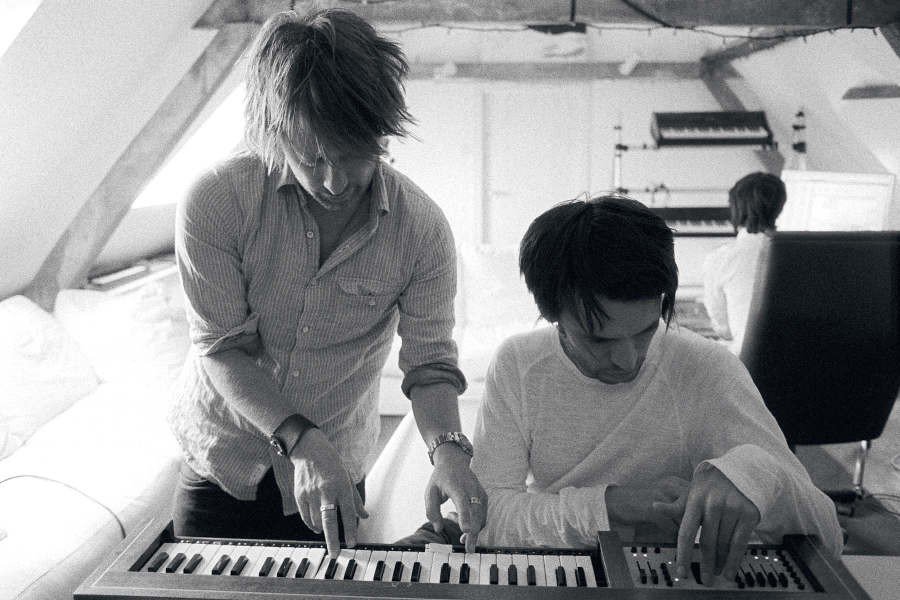 One of the most electronic rock songs (and vice-versa) Radiohead ever wrote, from In Rainbows. But the rhythmic construction, the use of sequencers and samplers make a masterful marriage of modern instruments and machines. This live version, recorded as part of their From the Basement sessions is proof of their talent for reinterpreting a song with very few elements.

The last song on the album, with a notable nod to Dub and Trip Hop techniques in the mix down. A mirrored construction around a descending scale which becomes the centre point. One of Yorke’s greatest songwriting successes.

Drum machines and synthesisers almost buckling under the weight of the whammy, a piano chord progression and minor scales. If you had to take a single song from his solo records to represent Yorke’s style, it could well be this. The album The Eraser moreover is considered by many musicians as a total masterpiece.

We conclude this selection with the unlikely but brilliant ambient piece at the heart of KID A. In less than four minutes, the song pays homage to a genre which would otherwise take much more to express itself. Here again each instrument and timbre perfectly complements the whole, a precedent in mixing for all producers in the industry.