07 MIN LI-
RE
Accueil
Tous nos articles
Laurent Garnier: ‘I’m surprised to see the younger techno generation is interested in me’
Écrit par Trax Magazine
Much like the influence Jean-Michel Jarre had on electronic music, Laurent Garnier’s influence on house and techno in Paris needs no dispute. In return, the French give him no shortage of love. This year, no sooner did his name show on any festival line-up than the tickets were sold out. But how does he feel about this great return to glory? We asked this question amongst many others in TRAX #181 Legends Special. On the release of his collaborative album with Abd Al Malik, we give you the majority of the interview here. Interview by Olivier Pernot. Translated by Henry Hodson.

How do you explain this return of underground techno, with all the independent labels, collectives and new nights?

For the past generation, music had become obsolete, disposable. My generation fought to defend electronic music. We led the battles we had to. And electronic music made a return, it was everywhere. In adverts, in fashion, at the cinema. Today it’s a whole part of our world, our society. It got to the point where DJs and producers were thinking about marketing their name more than their music. And so music lost its value. The new generation wants to fight a new battle. To return to the underground. To give value back to music. What’s good about the new collectives and labels is that they’re talking, they’re listening, they respect each other, they’re coming together and progressing together. There’s a community spirit that marks a break with the previous, more individualist time.

So the electronic world, as its preoccupation drifted headlong towards profit, needed a kick up the backside?

But it wasn’t just electronic music. It was music in general. As the record market crumbled, musicians had to find money elsewhere and we returned to an age of marketing. Groups were surrounded with managers and aggressive agents, who sold musicians like products. But it that was a couple of years ago. It seems that things are changing at the moment in music. And in electronic music in particular.

“I’m the most surprised of all to see the young techno generation is interested in me.”

In one interview, you said quite rightly that ‘music has become a disposable product’. But you yourself are releasing HOME Box, a big box set.

Quite right, for some time, after digital music had lost its physical existence, and in some sense its flavour, today there’s a renewed pleasure in owning a record, a nice vinyl or a box set. There’s something very ceremonious about organising one’s record collection, or placing a box set on a shelf. We’re returning to those values, appreciating the object as much as the music. With the five 12 inches I released last year, I wanted to do something different, to display the eclecticism of my music whilst staying true to myself. I started by making music without knowing where I was going to release it. But then this idea of five 12 inches on five labels seemed quite fun. And now there’s this box set to bring it all together.

How did you manage to capture the interest of the new techno generation?

Maybe because I stay sincere. But I am the most stunned of all to see the young techno generation’s interest in me. I noticed it with Modeselektor. At first, I approached them with the song Revenge of the Lol Cat. I thought that a tune like that, downtempo, experimental, might be of interest them for their label Monkeytown. Gernot got back to me very enthusiastically and said they’d prefer to have a techno EP from me for 50Weapons. I was so surprised and honoured too by the idea. While at first I thought they were going to think: ‘But what does he want with us, this old guy with his music!’ (Laughs.) In the same way I was the first to be surprised that Motor City Drum Ensemble wanted to put my songs out on his label. For each label who welcomed the Garnier project, I wanted it to be clear and I said to them: ‘Release the 12” because you like the music, not because it’s Laurent Garnier!’

Do you sometimes make strategic choices to reach the younger generation: a 12 inch on Ed Banger, a night with ClekClekBoom, an afterparty at Concrete?

That may seem strategic but it’s not at all. I’ve been heavily criticized for my 12” on Ed Banger. But above all there were criticisms before the record was released. Because when it came out, everybody realised that I had just done… me. Nothing like the Ed Banger sound! To put out a 12” on Ed Banger was above all to put out a record with Pedro Winter. Pedro is an amazing and funny guy. I like him a lot. It’s a simple story. In a live show with LBS, I played an unreleased track, quite happy style, that I had called ‘the happiness song’. I posted a video with live clips on YouTube. One day, Pedro calls me and says ‘What’s that song, I love it!’ Pedro is a real devotee, mad about music. Always on the lookout. And then he says to me: ‘Mehdi would have loved to release this on Ed Banger.’ That really touched me. I said to him: ‘Okay, we’ll do it.’ The song was called Jacques in the Box. The jack-in-the-box is me. Like a surprise present from Ed Banger: I’m where you don’t expect me. As for ClekClekBoom and Concrete? There too there are stories of music and chance encounters. ClekClekBoom is a label I love. Since the first 12”, I wrote them a little note of support and encouragement. So I’ve been following their story and we came quite naturally together. Their invitation for a night at La Machine du Moulin Rouge, that was a real challenge for me. I had to be in keeping with the rest of the line-up. So I prepared a special Chicago set. As for Concrete, that was mad. I was in a restaurant in Paris and was told that one of the Concrete guys was at another table. I didn’t know him but I go and see him. I sit down opposite him and tell him I’d love to play Concrete. He said he’d love it but he didn’t dare propose it to me. He thought I had some kind of exclusive contract with Rex Club… Which obviously isn’t the case. And so, I played Concrete and had a brilliant time. 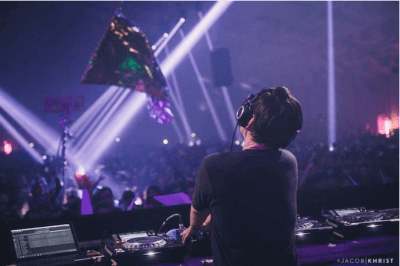 How do you choose the clubs where you play?

I only play the places I want to. I have the enormous luck to be able to choose. And I turn down places that talk money before talking music. Money has never been my priority. My only drive is staying motivated behind the decks. So I choose the places which seem exciting to me. Plus, in any case, I play less now. I don’t have such a packed schedule. I’m not 20 anymore, I have a family life.

You play in Ibiza once or twice every summer. What kind of relationship do you keep with this kind of mainstream techno world?

I’m fairly distant. It’s a world which doesn’t really interest me. I count myself completely out of the squabbling between Sven Väth, Marco Carola and Richie Hawtin… I played once in Ibiza last year. I’m not going this summer. In principal, when I go, it’s to make Carl Cox happy. I go when he invites me. Carl is a mate of mine. A really kind guy. And I think I am too. I’m not a massive fan of what he plays, but he always gives me the Pacha / SPACE (see comments) terrace. And that’s cool. It’s like Croatia. That’s the place you’ve got to go now, it seems… The new Ibiza. I played there once and I didn’t enjoy it at all…

What drives you to go and try new places, like Yolo at Rouen, a club with a capacity of only 400?

But I’ve always done that! With F Com, we have always swept around: going to new clubs, new countries. If I only played events like Time Warp, I’d go mad. I need to play in places like Yolo, places that intimate. And that night in Rouen was really great. I have a fantastic memory of it.

Do you ever feel constrained by a certain kind of techno that clubbers expect?

Whenever I feel like a prisoner, I do a u-turn. I develop my set. I try to bring the clubbers towards something else, but smoothly, gradually. By gentle suggestion. You always have to find the right songs, the escape routes.

Do you get different requests: to play only house or world music?

Sometimes yeah and I love that. It’s three years now that a guy has been contacting me for a hip-hop set. I’m going to do it! No doubt! But at the same time, there’s a risk of being imprisoned in one style alone. In my sets I like to mix genres. Techno is never so good as when it’s played with other music!

These last few months, you’ve done a lot of back-to-backs, with Carl Cox, Boys Noize, Motor City Drum Ensemble, S3A. You’re doing another with Marcel Dettmann. What do you like about this kind of contest, however friendly it may be?

It’s not a contest. Rather a journey for two. It’s as though you were following someone in a town you don’t know. You follow a person down the street. Then, in the next street, you change and follow another person. You don’t know where you’re going to end up. Back to back takes you out of your comfort zone. It could end up being something great… or not. With S3A, the back to back was magic. We took it so far and even we weren’t expecting it. With Boys Noize too. The most important thing is for the DJs to really respect each other.

Is there a DJ with whom you’d like to go B2B?

I’ve never played with Kerri Chandler. I’d love to do that. With DJ Harvey, that could be great too. There’s a certain coherence there. As I’m quite eclectic I’d always manage to adapt myself. But in fact there are loads of DJs I’d like to play with!

In a year’s time you’ll be 50. What motivates you to keep going to clubs?

Because there’s always so much to see and do. It’s the same as 20 years ago. That’s where it’s all happening for electronic music and the hunger to release music to dance to has never left me. That’s what makes me happy, above all. 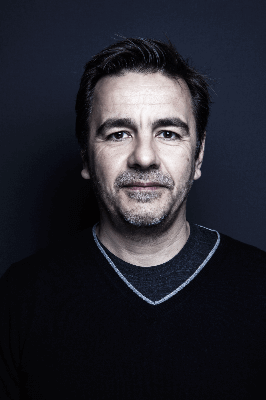 Are there things you still haven’t done that you’d like to do?

Opening my own place would be really good. A wine bar perhaps. A place with a nice atmosphere, where you can eat and drink… where you listen to good music.

Bob Dylan recently said: ‘If I had to do it all again, I would rather be a teacher.’ And you? Would you be a chef?

Cooking is part of what makes me. I cook a lot and I like to eat. But I think that if I had to start again, I’d like to be a musician. Not necessarily a frontman, a singer or anything, but rather an exceptional musician!