06 MIN LI-
RE
Accueil
Tous nos articles
Kollektiv Turmstrasse: “Becoming the masters of the universe takes time, so we do music”
Écrit par Sinah Vonderweiden
With over a quarter of a million likes on Facebook, the duo Kollektiv Turmstrasse is already one of the big players in German electronic music. In Europe, the project is becoming increasingly famous and if they carry on like this, world domination might not be so far away. But for now a new LP, video and remix are their big plans. Trax caught the two guys from Hamburg in conversation.

Salut Nico and Christian! You are soon playing at the Made Festival here in France. Are you looking forward to it? Have you prepared any surprises for the show?

With the first question you catch us with our pants down (they laugh). No, we actually had to look up the Made Festival online, to see when and where exactly we are playing. But after a little browse on the Internet now we can proudly say : yes, we are happy ! And our shows are always special ! However, due to the long journey, we couldn’t pack up a whole fire show including dancers. But Nico says he’d still like our little confetti cannon somewhere…

The majority of German and also international producers currently live in Berlin. Why did you stay in your hometown?

After moving away from the provincial backwater, Hamburg was the first large city for us. The first years we spent here were extremely exciting and formative. Much of what came at that time and what formed us and our project, had its origins here. And before you know it 10 years have passed by, you have a family, friends and an inflatable pool in the garden. So we have to admit that we have put down roots here. Besides that we have collected enough experiences in Berlin and the capital is always worth a visit. But for us the musical leaning of the city, or the high concentration of clubs and artists, was never motivation enough to relocate the whole of our lives to there.

Together with the label Broken Forms that organises underground open air parties and club nights in Hamburg, you had a riot recently at the Gruenspan. How much do you usually like to participate in the running of events?

We would sometimes like to have more influence on the organisation and the management of certain nights. And we definitely could, if we wanted. But alongside our music, we don’t have the time for it. So, with the guys from Broken Forms we’re in very good hands. Without a massive exchange in advance, we were on the same level and put on a great event in the end. If an evening like that runs perfectly, everyone really appreciates it.

In your hometown you are very well connected, but how does it work when you play somewhere else?

Sometimes it’s a bit like gambling. If you are in a new city for the first time, when you see a new club, a new promoter, an evening like that can go very well, but not necessarily. So if it’s not good, we wish we could take a bit more control. It’s often about fitting all the little pieces together, into a coherent whole. There are countless factors that have to fit for a good show.

So what comes next? You have loads of upcoming events in Switzerland, Italy and the Diynamic Festival in Amsterdam…

For us, becoming the masters of the universe is always the main project (they laugh). And because that could take a while, we are currently working on a new record for Diynamic. We can also reveal there will be a video for “Sorry I’m Late”. A remix of the track is actually also in planning, but we can’t share any more details yet. Also there’s the idea of tackling another LP and of course the summer, with many small and large festivals, is coming. So you see, we’re quite busy.

On your SoundCloud page I read that you make “music for body and soul”. Is there is a spiritual aspect reflected in your music? And how does a musician even address the body and mind through music?

With music for body and soul, we mean simply that it’s our personal aim to create a sound that appears in a visualised way. Like moments where you’re closing your eyes to feel the music. That does not necessarily mean that we have a spiritual orientation. It’s just our own idea of moments and memories, which we try to capture in our sound.

More concretely, how would you describe the effect that your music should trigger for the listener?

As a musician you always wish, of course, to inspire people with your music. It’s a certain type of communication, a track can sweep an audience away. And it’s important to us to develop a certain kind of timelessness, which is something you can’t really plan. Sometimes you get the feeling you’re working in the right direction. But basically, we are pretty selfish when we are in the studio. We make our music in the first place for ourselves. With our concept, we try to implement our ideals without putting the focus too much on clubs and dancefloors. We try to avoid trends and we also attempt not to be influenced by the current music market.

Is what people perceive sometimes the opposite of what the producer expects? The effect of a style like minimal seems quite predictable to me at first glance, but in reality it might be completely different…

Well, of course it’s a very good feeling when you have direct confirmation from the audience at show. Like in the form of “all arms raised” and euphoric outbursts that echo back to us. But just as some moments are good in an intense way, when everybody just says with the music, and you look at the crowd and see that the majority has their eyes closed… Then you know that the communication, the carrying of emotion, worked for them.

However, it is also important to us that our music does not only work in a club context. We are just as happy when someone comes up to us and tells us what the music does for them while jogging or on the way to work. Surprisingly, there is quite often a match between the listeners and us. And sometimes there are those mad moments where a complete stranger tells us why our own track reflects his life in some way.

And what was your most glaring moment in your career so far ?

The memories we have of special moments come more from the early days of our career. We believe it’s simply that back in those days everything was new and exciting. We didn’t stand back from things, as today. We count a whole lot of smaller events on the list of highlights. The moments we experience today are certainly much more intense and larger. But these impressions don’t stay long in mind. Often, only 14 days after a performance we can barely recall where we were, what we have seen. No, not a result of debauched parties or excessive nightlife. It’s a natural result of so many memories that you simply can’t keep all in mind.

Would you share one special moment that sticks with you?

It’s hard to choose one story as there are so many, but for us the Fusion Festival is always a great experience. Canada has left its mark in our minds too, especially the Igloo Festival where it was -30 degrees. We always enjoyed those nice discussions with wobbly ravers about the possibility of buying drinks from our DJ booth.

One funny moment which always springs to mind is us both at about two in the afternoon, waking up in a chair somewhere in Siberia. Right in front of us stands this non-anglophone promoter, wildly gesticulating, wearing only leopard-print panties. And he wanted us to follow him…

So, that is how being a musician feels, when you DJ in the techno scene. Does this represent your life as a DJ, or what is it that animates you?

The life of a DJ… You’d think you were asking the right people. Well: we are in the 10th year of our career now, so we can professionally look at the whole thing. One might think, sure the guys must have something to say, but we still don’t see ourselves as famous artists. It’s often like living in two different worlds…

For our life at the weekends with all the travelling, the many impressions, we can say that we’ve had positive as well as negative experiences. What we do often feels like a sort of compressed weekend adventure. And as always, we are very grateful for this opportunity in life. That we can live out everything that we love and still pay the bills and have our income. Family and joy in life are very important to us, so the calls of Paris, Moscow and Amsterdam are easily forgotten… If you’re then back from your weekend as an artist and you place the luggage in a corner and from the kitchen you hear “Honey, did you think of the garbage!?”, then one often wonders if it isn’t all quite crazy.

Another thing is your technical principle at work: with which equipment do you design your music?

For us, a real recipe doesn’t exist… We learned over the years that you can’t force production or commissioned work from us. The moment must be right, the head must be clear, only then something arises that can be produced in the studio. Our setup’s pretty classic: a lot of analog devices, which are frequently replaced with new toys. All this accumulates in a semicircle around our core, in this case, an audio workstation with Ableton Live. Of course, good studio monitors are important as well as a space that you understand and know. We really like trying out new things, whether it’s coming to hardware or software. The youthful motto “Jugend Forscht” lives on in us… [editor’s note: this is a German youth research competition.]

Did you already notice that Apple Music is using Dubset as a new identification technique for music that can scan a mix? It’s about to pay the artists fairly for their music, especially when it’s used in mixes which are later put online.

For musicians like us, who make a living from music, analysis in whatever form always plays an important part. A fair evaluation – if at all possible – we would welcome of course. We follow the development in passing. But it seems to be definitely a step in the right direction.

How do you feel generally about streaming music ?

The issue of streaming and also the evaluation of independant electronic music is very complex. Many new platforms emerge, but at the same time many of the streaming systems are not very transparent. If you want to participate in the discussion in this field, you have to invest a lot of time and become familiar with the subject. 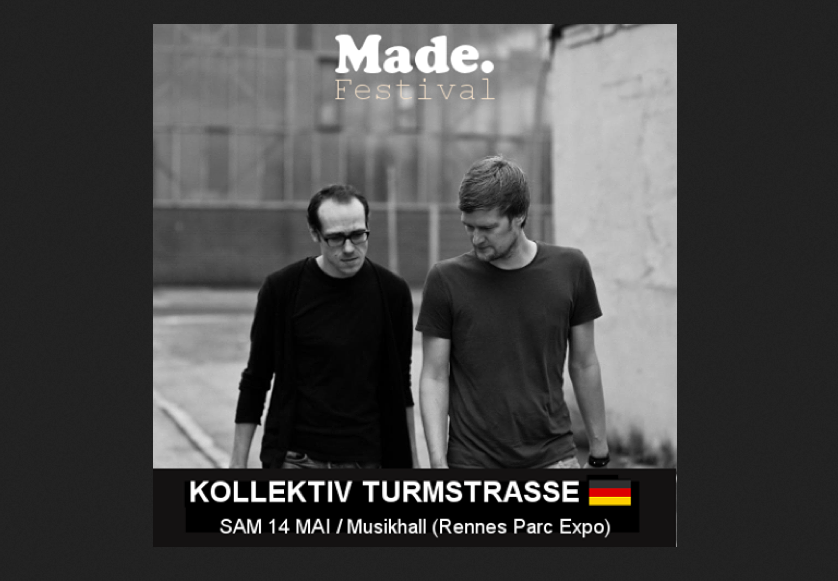 03 MIN LI-
RE
Made Festival Rennes

02 MIN LI-
RE
Made Festival Rennes