06 MIN LI-
RE
Accueil
Tous nos articles
La musique
Jean-Michel Jarre and Edward Snowden: the story of the most unlikely song
Écrit par Jean Paul Deniaud
One of the masters of French electronic music remembers his collaboration with Edward Snowden, the video for which comes out today. Why did Jean-Michel Jarre invite the man who opened the United States’ eyes to illegal monitoring systems to be on his album Electronica 2: The Heart of Noise? Well, here are your answers.  Translated by Henry Hodson.

Say what you like about Jean-Michel Jarre, you can’t take this away from him: the French producer takes electronic music far beyond its boundaries. He was the first, perhaps along with Kraftwerk, to bring ‘synthesised’ music into the public conscience. And his audience of 3.5 million in Moscow 1997, all come to see a French man play a blend of analogue ambient-pop over a laser lightshow, remains a world record to this day. To name just a few feats.

Listening to how he brought in, on his latest project Electronica, some of the genre’s greatest names (from John Carpenter to Moby, Jeff Mills, The Orb and Air) we wonder if his secret resides in three things: an imagination overflowing with ideas, the naivety of thinking anything is possible, and the intelligence to ultimately achieve it. For the sceptics who criticise the results, he has only one response: ‘electronic music has a habit of taking itself too seriously.’ For this a more, we offered him our November cover.

Why on earth would he make this song, Exit, with Edward Snowden? The digital surveillance specialist, ex-administrator of the CIA then of the NSA (the agency of American intelligence), uncovered in 2013 the numerous data systems of the American and British governments and their secret use on their own citizens. In promotion of his second volume of Electronica: The Heart of Noise, we asked the question. Without forgetting how a feature with one of the most wanted men was even possible. Jean-Michel Jarre never fails to impress.

Watch below: the ‘Exit’ music video with Edward Snowden, filmed in Mosco and released today.

Can you retrace the beginnings of this collaboration?

I’ve just come back from Moscow, where I met Edward in person for the first time. It was the day before yesterday (the interview was conducted on April 5, Ed.). To begin at the beginning, I had always been struck by Edward Snowden because he reminded me of my mother. My mother was a big figure of the resistance in Lyon, in which she was involved from 1941: at around the same age that Snowden made his revelations. When society crosses a line, some people must take a stand. And often, they do so despite the majority’s opinion. In ’41, when my mother joined the resistance, she also joined the ranks of those considered traitors in the face of established authority. Pétain (Philippe, a French war hero later convicted of treason, Ed.), the collaboration, that’s just what had to happen. People who take a stand get knocked down. It’s the exact story with Snowden.

The line between hero and traitor is obviously subjective. That’s why Snowden moved me. The guy’s overly gifted as a hacker, at 21 he was hired to encrypt documents for the CIA, then moved to the NSA for similar kinds of work. In such an important post for his age, and he finds himself in a dilemma: the more access he has to these documents, the more he realises that the organisation he is working for is breaching the privacy of his country, his family and friends, and by extension the entire world. He comes to the crossroads: do I speak out or not? He says nothing to his girlfriend nor to his parents, isolates himself in Hong Kong and contemplates what to do. Then he contacts a girl by the name of Laura Poitras, who was later to direct Citizenfour (the Oscar-winning documentary on the revelations made by Snowden) and his story takes a very different turn.

How did the idea come about for a collaboration with him? You didn’t consider Julien Assange too?

It’s different. Across its double album format, Electronica explores the question of our day-to-day relationship with technology. With Laurie Anderson on the track ‘Rely On Me’, the theme is our dependence on, even addiction to, mobile phones. ‘Swipe to the Right’, with Cindy Lauper, is a love song for the Tinder generation.

There’s this ambiguous relationship with our smartphones: we have the world in our pockets, we have access to information on every subject, everywhere, and at the same time, we are under worldwide surveillance. I wanted to explain that, not in a political way but an artistic one. And since this album is a collaborative record, why not work with somebody who is deeply tied up in technology, a child of the digital age, who himself uses plug-ins, just in different ways from our own. That’s how I got the idea.

“Your guest is on the way, but your guest is hungry and if you could order a cheeseburger for him, that would be great!”

It wasn’t difficult to organise?

It was complicated because at first I didn’t know how to reach him! A few months ago, I was in contact with the Guardian for the promotion of the first half of the album. At the end of the conversation, I asked the editor of the culture section if it were possible to contact him, since the Guardian was at the root of the revelations. Very intrigued, he tells me yes and asks why. I said I’d tell him another time, because it had nothing to do with our conversation on the first part of the album. And I wasn’t lying because it was for the second work!

The journalist who interviewed Edward Snowden put me in contact with his lawyer in New York, a specialist in human rights and free speech. He’s a super nice guy, Ben Wizner. He told me that Edward Snowden was delighted by the idea, and that what’s more, he loves electronic music. For him, electronic music meant 8-bit, The Commodores, the first video games. It’s funny that we should have that in common. So there was a first meeting in place.

Snowden sends me a URL address as long as my arm to type out, and I’m told to be in front of my computer at 5pm. This was in the studio, on the big screen. At 5, with my manager Louis, we set up the cameras to film the whole meeting. I have no idea what’s going to happen. And finally, he appears in my studio, on the screen. We spend an hour and a half in the videoconference, we talk a bit about everything. He was completely immersed. I had already sent him a demo and he seemed to really like it.

“I am against artists turning the scene into a political forum.”

And why did you go to meet him again in Moscow?

When I started to rework the song more thoroughly, we said it would be good to record it ready to play at festivals and concerts. We talked a lot about that, because he has no desire to be a symbol of any kind. I told him that the symbol is what he expresses, what he’s done, his actions, rather than himself as a person.

Organising the meeting in Moscow took a lot of time. Last weekend we went for three days, we took shots of the town and the metro for the music video and filmed it for about three hours. He came to the hotel I was staying in. I don’t know where he had come from.

He has to take huge precautions.

It was like a spy film, seriously. He called me and said: ‘Your guest is on the way, but your guest is hungry and if you could order him a cheeseburger, that would be great!’ We had a great time together, he’s an amazing guy. We spoke about a lot of things, music, the record, about his opinions. He wanted to record some things in French about the state of emergency, to explain in an intelligent manner that it is not a solution, that it can even be counter-productive.

When does it come out?

Today! There will be the music video, of course, and the images for the stage. For ‘Exit’, I’m going to have him right behind me. Even if I’m against the kind of artist who turns the stage into a political forum.

“The next generation will distance itself from YouTube and the idea that filming your socks is worthy of the whole world’s attention.”

Massive Attack are different. I was thinking more of Bono. We are not journalists, we are artists. Through our music, and our lyrics, we can be pertinent. But stopping playing and starting a discourse to save the world, I don’t feel that too much. But I do feel that in an album like Electronica or even for a young readership like Trax’s, it’s great.

Today, for the French generation brought up on BFMTV, the reference point is Marine Le Pen. It’s not a bad idea to give other points of view either, like Snowden’s, a thirty year old guy raising questions of our future in relation to technology, the internet, and individual engagement. It’s timeless and it touches every generation by the time they reach reflective maturity. 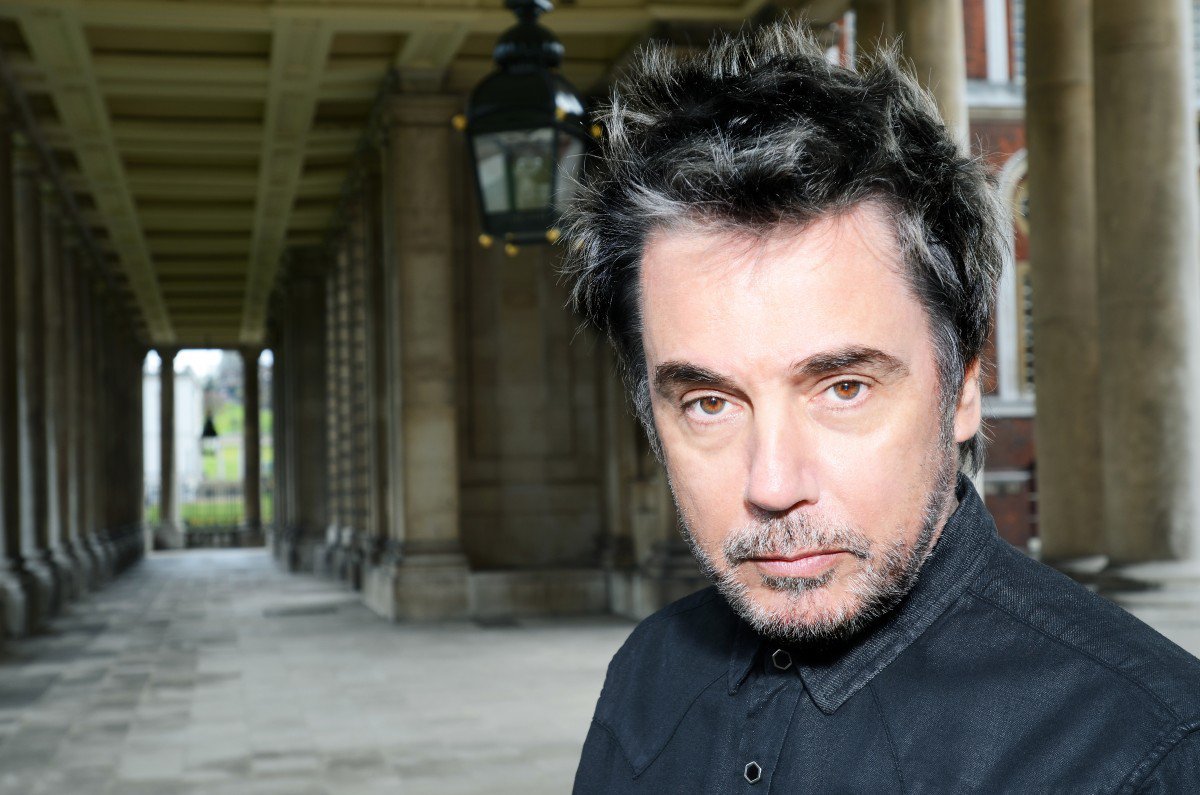 “What is it that fits best with society today? Electronic music. For me, that’s the reason behind the whole project.”

The medium changes and we think that it has changed everything, but in fact this is not the case.

Exactly. The TF1 (French equivalent of BBC1) generation were told that children would be completely doped by the television. Today, teenagers don’t watch TF1 at all, and I think that the next generation will distance itself from YouTube, and the idea that filming one’s socks, underwear or what you had for breakfast is worth the world’s attention. Every generation has its Resistance, its opposing forces. And today, it’s more important than ever that those forces reveal themselves. That’s why I wanted to do some of this with him, and I think he really filled his role on the album.

It’s also that electronic music has become the music of the Internet Age.

It’s exactly that. This discussion would be impossible to have with other publications in France. As you said, what’s interesting is the relationship between electronic music and technology… It’s like rock and the social movements in the time of Bob Dylan. What is it that best fits with society today? Electronic music. For me, that’s the reason behind the whole project.

Jean-Michel Jarre – Electronica 2: The Heart Of Noise (Sony Music) is out on May 6