05 MIN LI-
RE
Accueil
Tous nos articles
Jan Schulte: “The Salon des Amateurs changed everything in Düsseldorf”
Écrit par Lewis Barnes
The man behind some of the most interesting releases from the last few years, Jan Schulte aka Wolf Müller aka Bufiman has been slowly climbing up the ladder of electronic music and is now one of its most exciting figures. With a big 2017 ahead of him, we thought it was about time to formally introduce you to the Salon Des Amateurs resident. We sat down for a drink ahead of his show in Paris.Interview by Lewis Barnes and Daniel HallströmPhoto: Phil Struck

Jan Schulte’s music isn’t easy to categorise. From the “classic house” of Bufiman to the slower, other-worldly compositions that he releases as Wolf Müller, the styles of his productions are as various as his aliases. He’s also a keen collaborator, having worked with Christian Pannenborg as Montezumas Rache and ambient musician Cass to produce ‘The Sound of Glades’, a stunning mini-LP that sees Mr. Schulte’s obsession with percussion and rhythms take a more ethereal turn.

With releases on the esteemed Themes For Great Cities and Versatile labels, the Dusseldorf musician’s approach to production is decidedly individual: “if something I make reminds me of something else, I’m just like ‘wrong direction… I’m gonna do something else’”. That might be the reason why he’s something of an outsider to the world of dance music that he is increasingly involved in: “I didn’t grow up on it, but still I’m super fascinated by it and try to make my mark on it.”

Despite his unquestionable talent as a producer, Schulte is arguably at his best in the DJ booth. A resident at Dusseldorf’s revered Salon Des Amateurs alongside Tolouse Low Trax, Lena Wilikens and Vladimir Ivkovic, he has learnt the meaning of “anything goes” and knows better than most how to build a coherent set while jumping between styles. He’s not one for bells and whistles, rejecting what he amusingly describes as the “‘bass drum out… hey, bass again!’” style of mixing in favour of a carefully chosen selection of records from a deep and varied catalogue.

When we catch him at La Java in Paris, he starts off in true Wolf Müller style with a few slow, drum-heavy numbers to warm up the crowd. Skipping through stacks of unheard, chugging edits and weirdo house tunes, it’s not long before he’s ramped up the tempo, slamming out a heavy, rave-inspired breakbeat track that sets the whole dance floor’s feet to motion. Turns out it’s a forthcoming collaboration with Tim Schumacher aka DJ Normal 4 – watch this space. Next up, we’re thrown back to 100BPM, but no energy is lost as Schulte takes us through a second hour of low-tempo dance floor delights, before finishing on some uplifting central African disco. All in two hours’ work…

But that’s enough from us – we managed to take an hour out of Schulte’s busy schedule to find out a bit more about him, from the horse’s mouth. 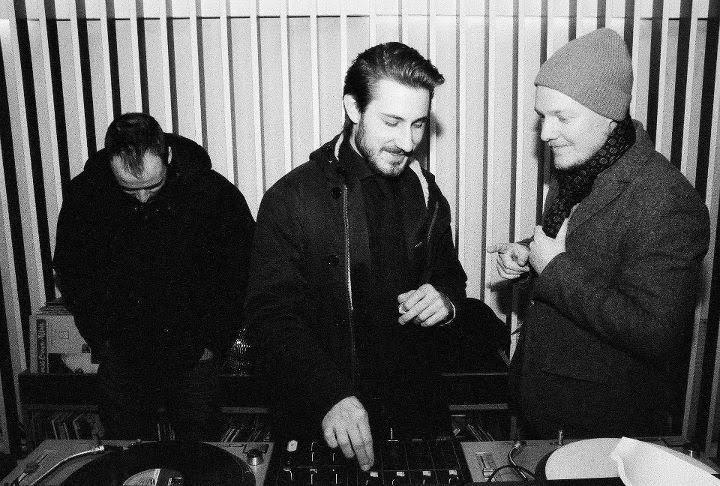 Can you tell us a bit about your musical upbringing?

I grew up in Dusseldorf, and when I was quite young I was really into break-beat stuff, like b-boy music, and that has always been a big influence. I started digging records with more jazz-funk and free jazz orientations, but then when I found out about Dusseldorf’s musical history, things started to make more sense.

Dusseldorf was a big krautrock city, right? How do you view your relationship with that history?

Yeah, Dusseldorf had a huge scene for krautrock, new wave and punk. There are so many great bands from Dusseldorf… Neu, DAF, Pyrolator… There are loads. I had Kraftwerk on cassettes from my dad from when I was six years old, but I was 20 when I found out they were from Dusseldorf. So nowadays it feels natural to be relying on that history, and I feel very connected to it, but I found my way there through a different approach to others. As far as clubs are concerned, Dusseldorf never really had that strong a scene. It had a few well-known clubs like Ego, which was super famous for minimal techno. When all that stuff closed down and the city was trying to find a new identity the Salon [des Amateurs] opened up and changed everything. It came along at the right time to show me that you can experience a collective moment on a dance floor to music that people have never heard before. You can get this incredible shared moment out of it.

Were you ever into the minimal scene?

Not really, to be honest. It just bored me. But what’s very refreshing to see is the open-mindedness of the scene at the moment. Young people are growing up with an appreciation of a huge range of different styles, so I can really play whatever I want, as long as I play it correctly. You can play fucking jungle, you can play 60s… freakbeat, you can play 2017 trap… Whatever [laughs]. If you do it correctly, anything goes. Everywhere I go, people are more and more keen on weird music, especially in the small cities. A lot of my friends moved away to big cities like London and Berlin when we were younger but I stayed in Dusseldorf, and we made our own shit… like, grow your own fucking shit.

The Salon seems to embody that open-mindedness and eclecticism.

It’s nice that you say that, because a lot of people just seem to think that the Salon plays like 90 BPM dark grooves, because most of the records that come from there, like from Detlef (aka Tolouse Low Trax) and myself, kind of give that impression. A lot of people think we’re these weird frustrated guys because we make such slow music [laughs], but the Salon isn’t like that at all. Even Tolouse Low Trax plays 140 BPM acid if he wants to. We’ve had evenings when we’ve played krautrock at peak time, and people have been jumping around like crazy. And it’s not just a kind of “check out this rare shit” approach. We play hits too — anything from ‘Glow of Love’ by Change to ‘The Look of Love’ by ABC. It just has to be good music… Detlef sometimes plays Jason Nevins’ mix of Run-DMC ‘It’s Like That’, you know, the techno remix [laughs].

The word ‘ritual’ seems to come up a lot when you and other people talk about your music. Does it mean a lot to you?

Let’s say that for me, it’s an abstract word. It’s an idea that I kind of glorify. It’s like when I make songs about the Jungle, which I’ve never been to. That’s a theme that goes through my whole musical process: making music that’s about this adventurous place that I’ve never been to. The same goes for ‘ritual’. I have this glorified idea of a crowd of people going deep into a trance, but I’ve never actually experienced it. And I think you can get a similar feeling from some old krautrock stuff. Like the really early Kraftwerk tracks. The word is kind of overused but I’m okay with people using it to talk about my music because I would love to have people doing some weird dance ritual to my music.

So what’s in the pipeline from you production-wise?

I did an EP with Tim Schumacher [aka DJ Normal 4]. It’s kind of rave-y, breakbeat stuff. That’s going to master this week and should be out next year. I come from a breakbeat background but I never did it really, so it was pretty nice to finally do it. I was in Aswan, Egypt earlier this year with Santuri Safari, which works with The Nile Project – an initiative that gathers musicians from the whole Nile region to produce and record music together. It also tries to educate people about appreciating the Nile, because it’s currently being ruined by everyone mistreating it and throwing crap in there. Whenever one of the musicians had a free moment we would try and do some recording with them in the hotel room. I worked with Nubian and Kenyan drummers, and musicians from Burundi up to Egypt. I tried to get them to do some straight 4/4 rhythms, and to them it was almost boring. Their approach is so different. Their rhythms have names that might be taught by their parents, from their parents, and their parents, and it has a kind of sacred, spiritual quality. It was really emotional. But yeah hopefully that stuff is going to be released in early 2017.