02 MIN LI-
RE
Accueil
Tous nos articles
Hors Série: the mini festival in one of Paris’ train stations reveals its line-up
Écrit par Thémis Belkhadra
News are accumulating and excitement is growing around Hors-Série, the latest production of Surpr!ze. The team behind Concrete and the Weather Festival innovates with a new intermediary format, and chooses Saint-Lazare train station, in the heart of Paris, as its first playground. They promised a line up “turned towards house music in a broad sense”, and the first names aren’t disappointing.Translated by Antonin Pruvot 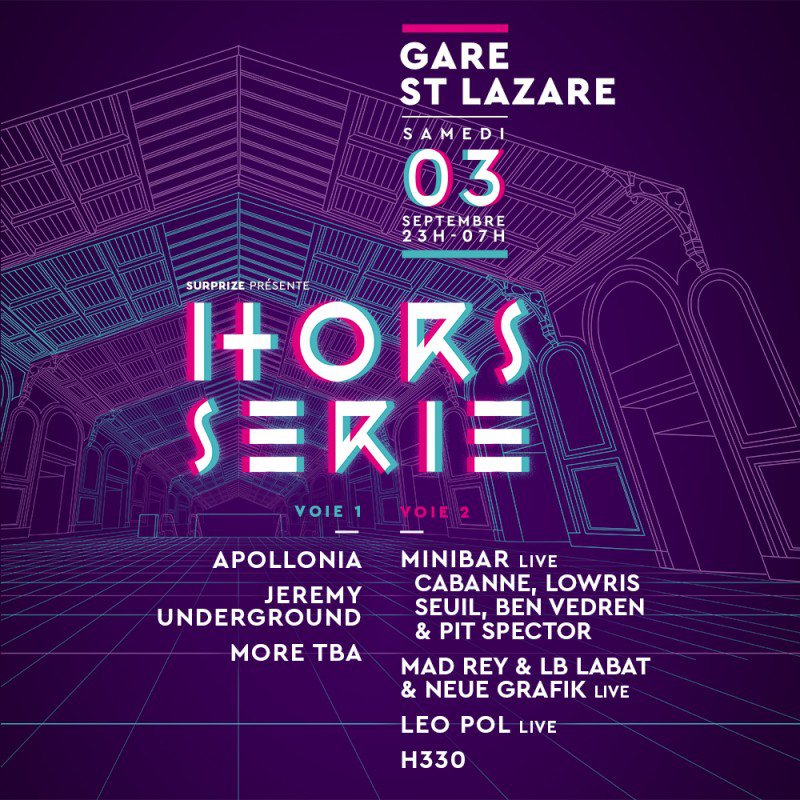 After announcing the birth of Hors-Série two weeks ago, and the incredible location of its first edition, Surp!ze releases the first names. And it’s heavy!

The Minibar label will be represented by its finest: Cabanne, Lowris, Seuil, Ben Vedren and Pit Spector. They will perform together a well thought out and extremely groovy house live. Mad Rey, LB Labat and Neue Grafik will also be united in a singular performance. Leo Pol will probably follow with a much darker live. This one won’t play live but his DJ set is not something to be missed: H330. The producer attracted attention with a maxi released under Concrete Music, 03PM. Capturing a fresh house spirit with overwhelming basslines, 03PM02 is a masterpiece, yet no one knows who hides behind the H330 alias. Hors Série will give us the opportunity to find out.

On the other side, on the main stage, only two artists but not the least. The French trio Apollonia is the headliner, followed by Jeremy Underground, who knows how to set the dancefloor on fire.

So see you on September 3rd, from 11pm to 7am in Saint-Lazare train station for a house rave that will be as crazy as unique. 6 days left before the tickets price are announced.