03 MIN LI-
RE
Accueil
Tous nos articles
Five iPhone and Android’s music apps to download ASAP
Écrit par Partenariats Trax
For a few days, the freshly released Pokemon GO, attracts all the attention of electronic media. What a shame! To free ourselves from that Pokemania we have decided to talk about smartphone applications in a different way. No Pikachu or Jigglypuff here, instead of Pokemons we explored the Apple Store and Google Play in search of 5 apps that will help you fight boredom and please your ears. Written by Fouad BenchemanTranslated by Antonin Pruvot

The most breath taking: Clay 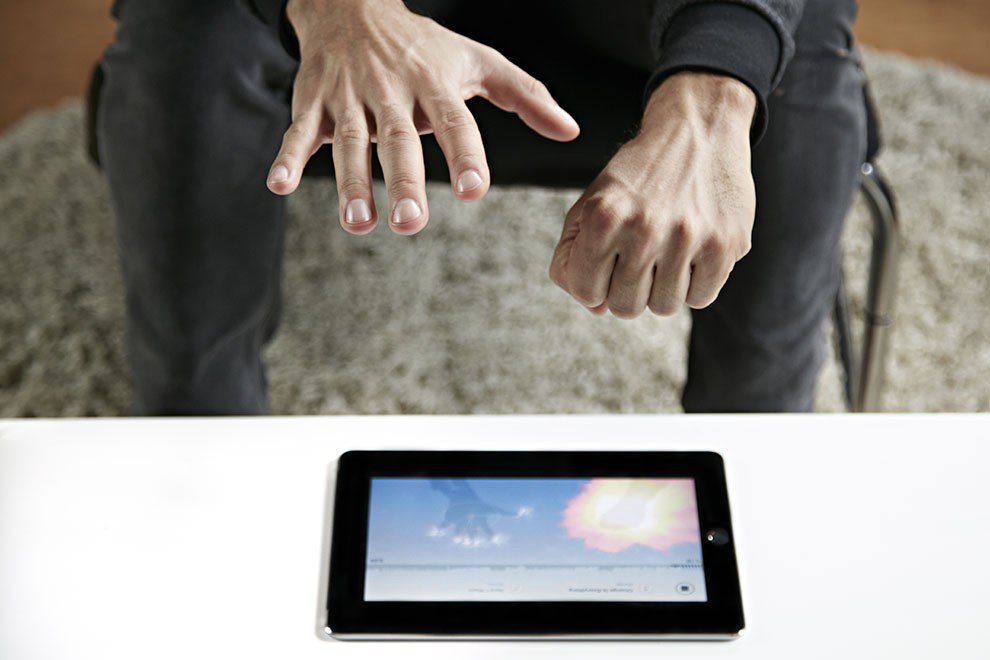 Last march, Jean-Baptiste Guignard, researcher in cognitive sciences, and Thomas Amilien orchestra conductor, launched a surprising application named Clay. It’s not about playing or composing here. Clay allows you to produce sound effects on tracks from your library with your hands’ movements. Every movement triggers a sound variation (reverb, freeze, volume changing…) and a graphic effect (smoke, ice, fire, explosion…). Those moves are captured by your iPhone’s or iPad’s front camera.

We’re quickly caught in that “air-DJ” app. The app is quick and easy to use, and supplied with good tutorials. The only regret is that you can only use the music from our iTunes library. Let’s hope that it might change in the next update. It would surely be nice to synch the app with your Deezer, Spotify or Soundclound accounts. Finally we did that test on an iPad and an iPohone 6 Plus, you might find it harder on a smaller screen. 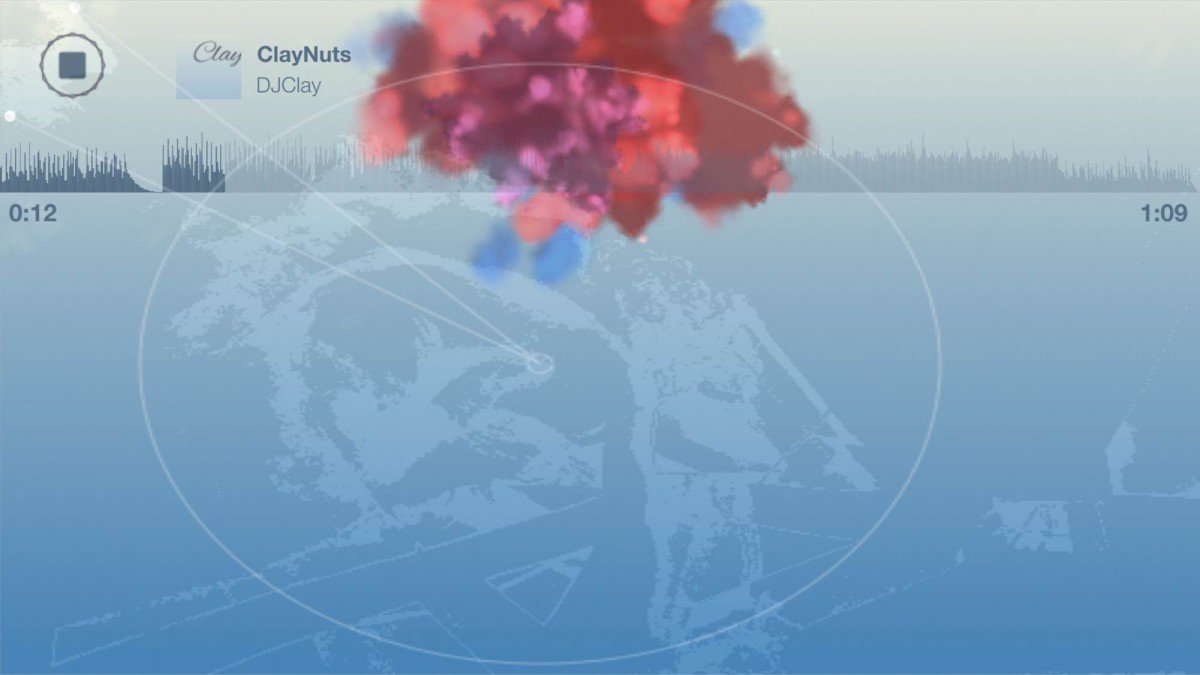 Clay is a free application.
Available on iOS, here.

The most useful: Serato Pyro 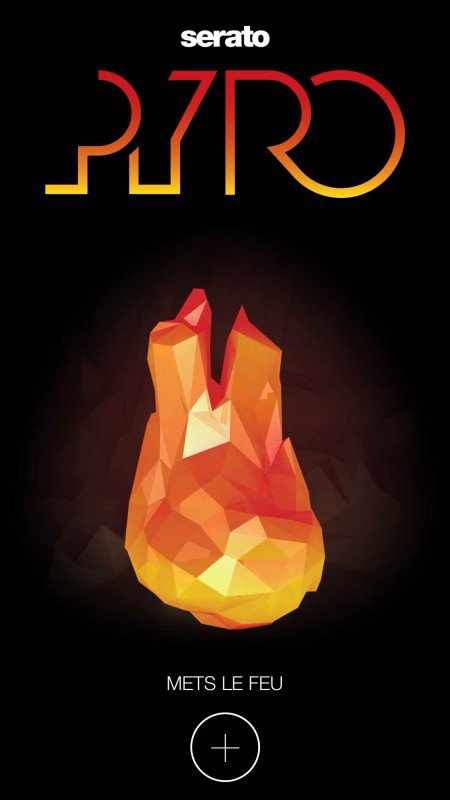 Careful! This app does NOT recreate the famous software’s interface. Rather, Serato Pyro is new party buddy that’ll take care of the transitions between your tracks for you. The app does not only fades your tracks but it completely synchronises the beat for smooth transitions.

Free and ad free, with the possibility of synchronizing your Spotify account. What else could you ask for? We tried last weekend and the app allows to do your stuff and stop minding the transitions every few minutes. The miracle has limits and you can’t ask it to do anything and expect to have a perfect results. If you have Eddy Mitchell after Dusty Kid in your playlist, even Serato Pyro won’t be able to help you. 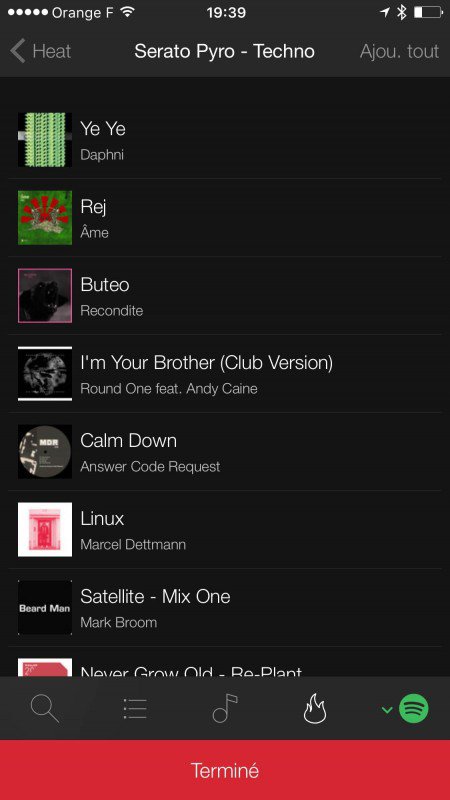 Serato Pyro is a free application.
Available on iOS, here.

The most unavoidable on Android: G-Stomper Studio 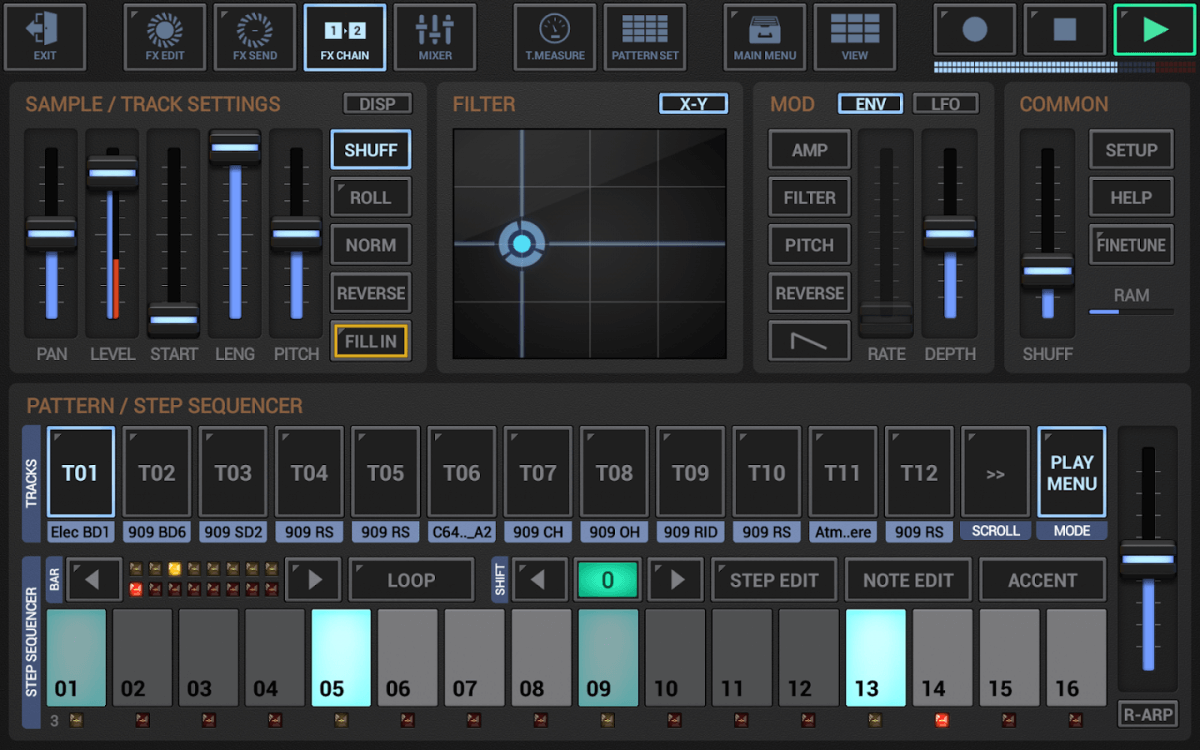 It might not be the most recent one, but it’s still the best on Android for music production. Thanks to the regular updates, G-Stomper Studio has few rivals on the Google Play Store. Of course there is a free trial version and a paying one so we paid 12 euros to get the full picture.

G-Stomper is a really complete production studio. The app has a polyphonic sequencor for melodies, a sequencor, a track grid dedicated to the drum machine, a virtual analogical synth and many effects. It’s exhaustive, it’s fluid but it’s probably not adapted to beginners. For the bravest there are many tutorials on YouTube. 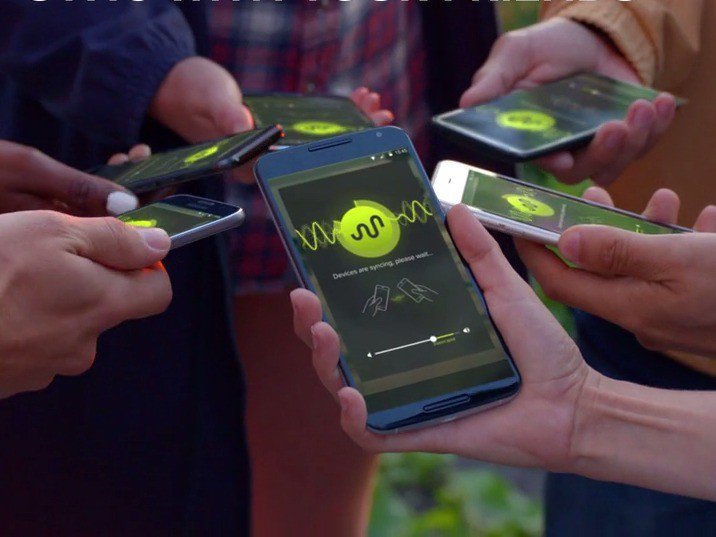 You’re in a park, well in the pre-drinks, all in a good mood, but your small speaker’s battery just gave up. AmpME offers an alternative solution, it offers to pair up several phones via a connected audio print composed of inaudible sound signals. The signals are received by the phones’ mics which allow them to synchronise. In short: all your smartphones are now capable of harmoniously playing the same music at the same time, creating a small stereo.

We were quite sceptical at first but we must admit that AmpME works fairly well. If it’s four of you, one needs to be the “host” and the others will be the “participants”. The host plays some music and a code appears on his screen, the others must enter the code on their phones to synch. The phones need to be relatively close to each other and use roughly the same volume. For now AmpME only works with Soundcloud and the synchronisation isn’t always perfect. You sometimes need to try two or three times before it works. Yet, you can save the day with four smartphones. An nice emergency app that we strictly FORBID you to use in the subway.

AmpME is a free application.
Available on iOS, here, and on Google Play, here.

The most accessible: Skram 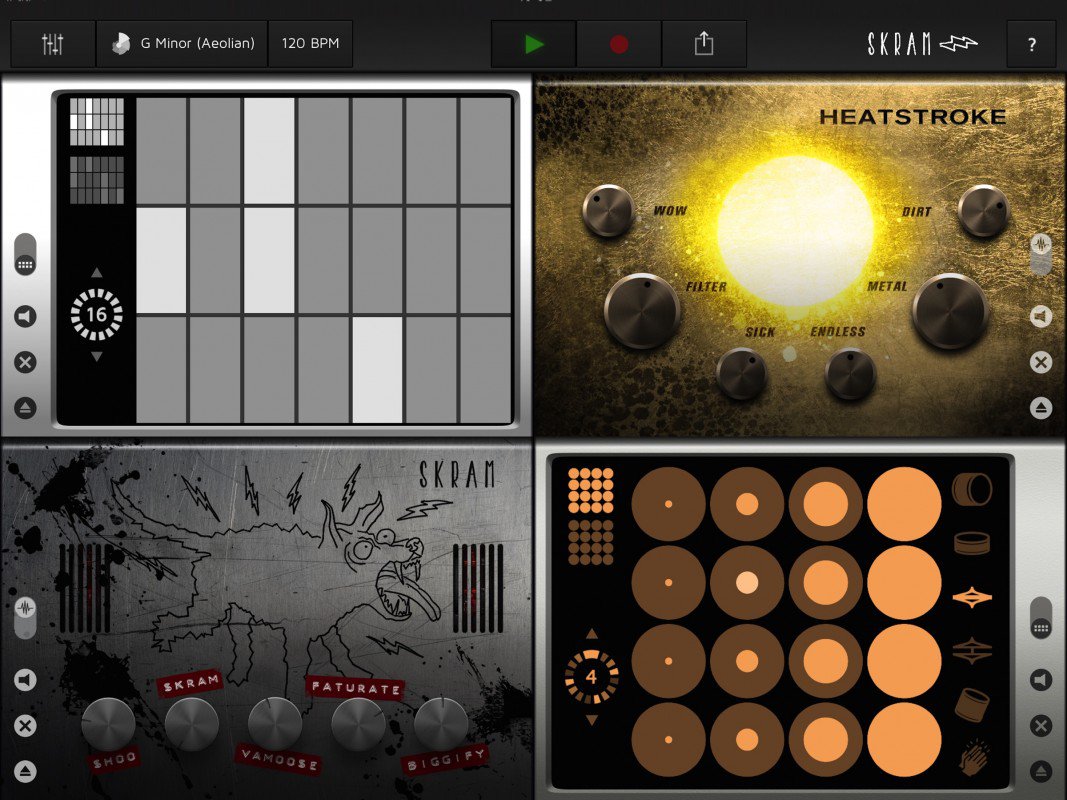 Here at Trax we quite like Liine studio that made the app Lemur. One of the first ones to allow you to transform your iPad in a MIDI controller. So as soon as we hear that they release a new app on the Apple Store we rushed to see what it was.

Skram gather tools management and sequence creation, also with some virtual instruments (drum machine, synth…). For the drums for example we can find the BR-909 module which is an emulation of the famous Roland 909. There also arpeggiator functions. The interface is pure and simple. All this for the price of a beer in “happy hour”. 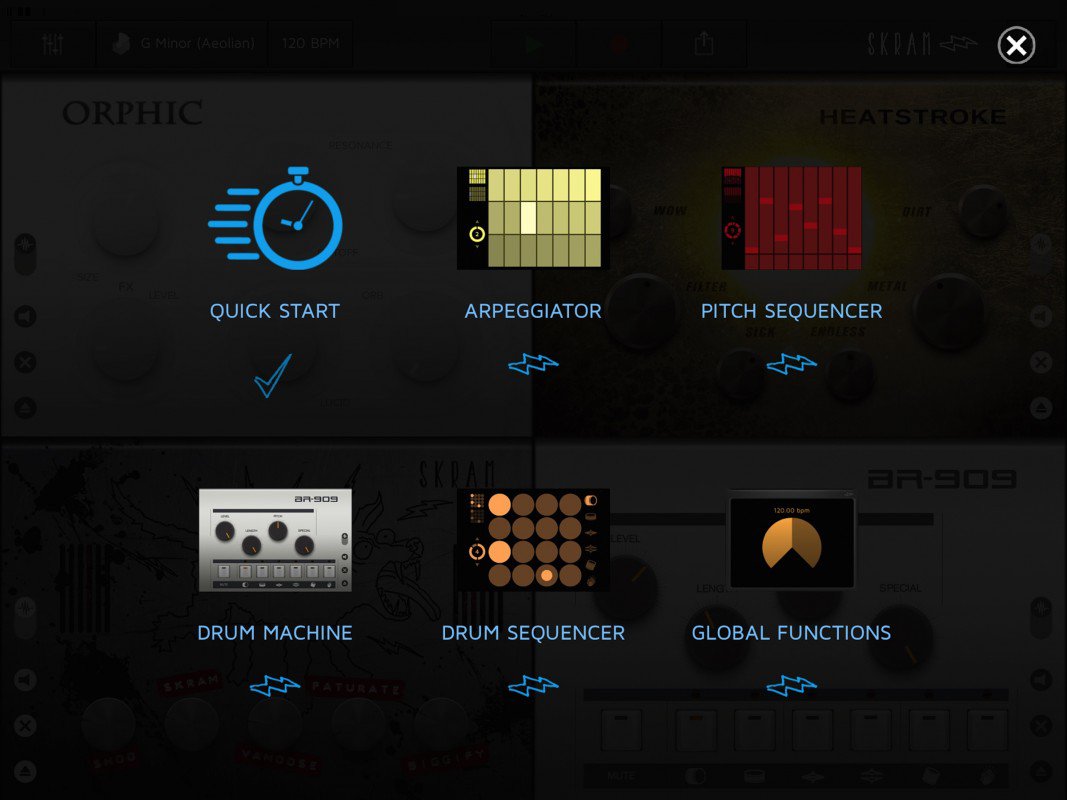