03 MIN LI-
RE
Accueil
Tous nos articles
Brexit: soon fewer English DJs to play at European clubs and festivals?
Écrit par Smaël Bouaici
This Thursday, Britons will cast their vote on the EU referendum. What consequences could this departure from the EU have on the dance music industry, where the artists, most often DJs, travel more than in any other field? Would Erol Alkan or Andrew Weatherall be able to come and play in Paris, Berlin or Barcelone as easily as they can now? Trax gathered statements from the booking agencies and promoters directly affected.  Translated by Henry Hodson.

Following the the assassination of pro-EU Labour MP Jo Cox last week, tension is quickly mounting around the Brexit referendum which takes place on Thursday 23 June. And now, for the first time, the surveys swung in favour of the Leave camp.

It’s not looking good for British promoters, for whom a big part of the job consists in sending artists travelling around Europe. For Ross Patel, senior manager at Grade Management, in Bristol, who manages most notably Seth Troxler, Eats Everything and Jackmaster, “it’s ridiculous that we’ve come to this point, I just don’t understand. We want above all else to remain in the EU, which is an essential market for us.” He says “it’s fear that has led to this referendum, fear of the unknown.”

Matthew Johnson, from The Pool London agency (Discodromo, Mr.Ties and Todd Terje), has just put up in his office the posters by Wolfgang Tillmans , who is fighting for the Remain campaign. From what he hears in the street and in the media, “people are confused. The world is not a very stable place at the moment with the attacks from ISIS and the hateful voice of Donald Trump. The Brexit campaign was orchestrated by the extreme right, whose main argument resides in the fear of immigration.” 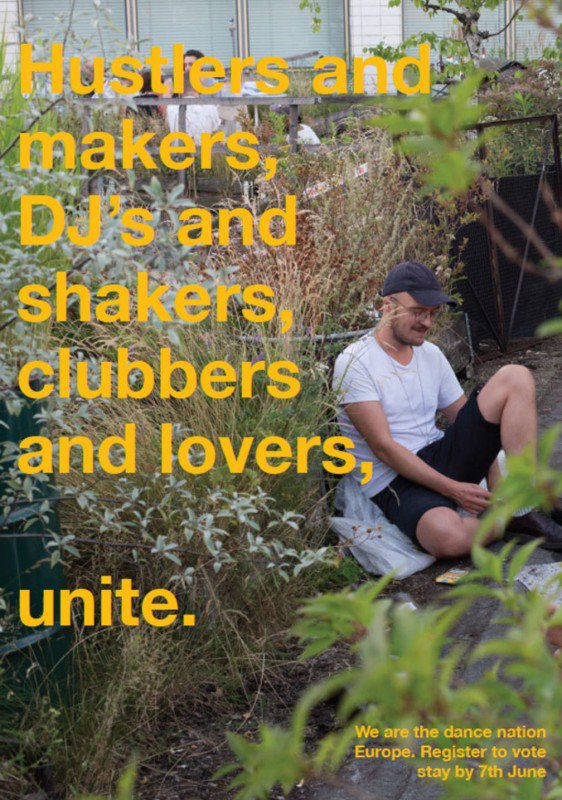 An argument which does not hold true according to Luke Williamson, from Earth Agency, who represents the interests of Kode9, Floating Points and Zed Bias. He denounces debate as futile, notably because of the uncertainty surrounding the consequences of withdrawal from the EU. “What will be the relationship between the EU and England in three years? What freedom of movement will we have? What commercial agreements will replace those existing? I don’t see how we can have a sensible debate and even less make an informed decision if we don’t know what we’re talking about. No one from the relevant departments of government can respond to us. Nobody is capable of explaining how we should prepare for potential departure from the EU. And it all plays in favour of the nationalists, because they can say what they like!”

This uncertainty is a worry for Ross Patel too, who will have to prepare for a change in the way he does business. “It might mean having to concentrate on the British market. However, if there’s one thing I’ve learnt from this job, it’s the value other countries hold for our business. Sharing the cultural diversity of our country, that’s the essence of art.”

For the booking agency, the worst thing would be the reestablishment of visas and working permits. “It would be disastrous,” explains Luke Williamson. “Will all the artists we book in Europe have to apply for a Schengen visa? Will the DJs we bring to England have to have a working permit? If this is the case, the EU will have a big problem, because there are so many sub-cultures that depend on free movement throughout the continent, club culture being one of them.”

From the 400 artists managed by the agency, he gives the example of a techno producer based in Amsterdam: “His market is not limited to the Netherlands. If we impose physical barriers on transport, the negative effects on the industry will be terrible, since it will no longer be able to create revenue for its artists.”

For Ross Patel, “it would be incredibly difficult to return to visas and working permits, it takes a lot of time. I would never have imagined that we could call freedom of movement around Europe back into question. It would also make things very difficult for the promoters who want to book our artists.”

“If the EU decides an artist on a promotional tour is a tourist (which is what happens at the moment with American artists), it will be okay,” reckons Luke Williamson, who emphasises the impact Brexit could have on the careers of DJs, a profession that is particularly vulnerable. “If I were a DJ in London, I would being travelling to France one week, Barcelona the next, then Italy etc. They have to move around all the time. It’s not a rock band, who go off on six month tours. DJs leave and come home every weekend. Freedom of circulation is even more important for them than for other artists.”

“I am not panicking, it’s not all going to come to a halt from one day to the next,” he continues. “The real problem is not knowing what is going to happen. How much time will time will it take to organise a trip from Europe to England for example? What will happen during that time?” “DJs aren’t going to stop playing in clubs, foreign footballers aren’t going to leave the Premier League,” Matthew Johnson concludes. “Life will go on, but it might be more complicated.”